Parties, pints and potholes - life is never dull when you’re following the Lions

I’m rooming with Peter Clohessy. It’s like living with a new-born baby 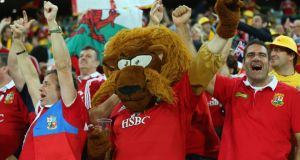 Lions supporters cheer during the first Test. The atmosphere throughout the game was like a carnival . Photograph: Mark Kolbe/Getty Images

On a Lions Tour, it’s not just about the players on the field. It’s about the big crowd of eejits that follow the team around, people from all four countries who come out here on the beer for a few weeks and maybe take in some rugby along the way.

I’m here with Trevor Brennan’s tour company. There’s a big gang of us that has gone from town to town having nights out and even playing a game or two. Men have got lost along the way. One lad hasn’t been seen since Heathrow.

I’m rooming with Peter Clohessy. I don’t really know how that happened. Someone with a warped sense of humour obviously dreamed it up as punishment for me. We’ve decided that between Trevor, Claw and I, we have about eight years of suspensions to our name. So maybe there’s a theme in there somewhere.

It’s not that bad now that we’re all grown up. The worst thing with him though is that we sleep when he sleeps. If he wants to go to bed at nine o’clock and wake up at four in the morning, then that’s what I have to do as well. It’s like rooming with a new-born.

As for Trevor, he isn’t the sharpest tool in the shed. As the leader of the tour, he booked himself into business class on the flight over. At one stage, one of the air hostesses came over to him and said, “Mr Brennan, would like anything from the bar?”

Trevor was all chuffed that she addressed him by name, thinking she must be a serious rugby fan if she was able to pick him out six years after he retired. It was only when he told us that he was going to give her his autograph that we explained that everybody in business class gets called by name. They have it right there on a list in front of them.

A jolly
That first week, it was hard to get a feel for there being a tour on at all. People were arriving every day from Ireland, England, Scotland and Wales but the Australian public didn’t seem to have all that much interest. You had to go deep into the papers to even see a mention of the Test series and you never, ever saw it on the back pages.

The Aussies are mad into their sport but rugby union is way down the pecking order. Depending on what city you’re in, the top sport is either Aussie Rules or rugby league. With the Ashes coming up, cricket is a massive deal. And even on the night that the Brumbies beat the Lions, a lot of the crowd were checking their phones throughout the game to keep track of how the Australian soccer team were doing in their World Cup qualifier against Iraq.

It’s been interesting to watch the Lions fans come together. Following the Lions isn’t anything like following your country. Obviously, it’s a big deal for the players and for everybody involved in the matches. But for the majority of the people in the stands, the whole thing is a jolly. People won’t lost much sleep whether the Lions win or lose.

The atmosphere at the first Test last Saturday reminded me of the Hong Kong Sevens. It wasn’t like a Six Nations game or a World Cup game. You didn’t have people on the edge of their seat and there was nobody who was really nervous or anything beforehand. It was a carnival atmosphere from start to finish. Lots of people weren’t really watching the game all that closely, plenty of them were in and out to the bar.

Fun first
Don’t worry – I’m not having a go. This isn’t like the Aviva argument all over again. It’s just interesting to watch, that’s all. Lions supporters aren’t really supporters in the way we think of supporters. Nobody has any real allegiance to the team. If Kurtley Beale had kicked one of those two penalties at the end of the game, it wouldn’t have changed the mood very much. The army of red shirts would still head off into Brisbane for the night and have a ball.

Because that’s what following the Lions is all about. It’s about fun, first and foremost. Apart from the players and staff, nobody’s day is ruined if the Lions lose. The people out here following the team around are on holiday with rugby as an add-on. Whereas if it was World Cup or something like that, we’d be here for the rugby but with the holiday as the add-on. It’s hard to get really passionate about a team that only come together every four years so most people just come and enjoy the party. It’s just a different mindset.

As the week has gone on, we’ve been joined by more old team-mates. Frankie Sheahan has arrived, Marcus Horan and Anthony Foley too. We all played in a legends match on Thursday night and we just about did ourselves justice. Some of the lads wouldn’t be in the best of shape now. Frankie’s belly is nearly at his knees and Foley isn’t far behind.

Controversially, Foley was picked ahead of me but his lack of fitness told early on in the game. His hamstring went on him when he was all alone on the wing, robbing him of his big chance to score a try against Australia. It wasn’t one of those where a guy feels a twinge and has to pull up. This was a sniper job, he went down immediately.

Swung a punch
So I got on the pitch in his place and I was a bit surprised at how physical the Aussies were and how seriously they took it. At one point, I came in the side-door to try to nudge Stephen Larkham out of the way and he didn’t take too kindly to it at all. He actually turned around and swung a punch at me, grazing the top of my head. Claw and Gaillimh were in fits laughing at me. It would have been something to come to Australia and get knocked out by an outhalf.

I suppose this is who were are now. We’re the old guys who attach ourselves onto these trips away, trying to pretend that we’re still young and fit. We hang about, trying to see can we get a free beer somewhere or other. We started off the trip joking about fans who we wanted to avoid. Sometimes you’re just trying to have quiet beer and a load of lads will start giving you abuse. We called those fans potholes – to be avoided.

But the longer the tour goes on, the more we come to realise that we are the potholes. If we run into anyone involved with the squad, we just sort of feel like we’re in the way. I was talking to Paul O’Connell the other day and afterwards I felt bad about all the questions I was bombarding him with. They’re out here to do a job, whereas we’re just following the party.

We are the ultimate potholes.