Paddy Jackson aims to kick on as Ireland’s number 10 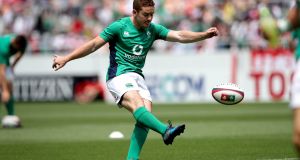 When Paddy Jackson took leave of the Ecopa stadium in Shizuoka, around the hour mark, a remarkable place kicking return remained intact.

“I was very happy [with Saturday], definitely with the team performance as well,” said Jackson from the serene perch of the Conrad hotel and its breathtaking vista over the metropolis of Tokyo. “We got off to a really good start and things clicked for us. It was definitely one of those days. The first half we were really happy with and it was nice. I had my kicking boots on as well so I hope I can continue that into next week.”

“I didn’t know that,” Jackson admitted, but he must have an inkling of the flawless return that many once felt was, like Joey Carbery currently, the main reason he could never become an international outhalf.

“Kicking has been, especially goal-kicking, a huge work-on for me from the get go. With Ruan [Pienaar] being there I missed out on a lot of kicking opportunities to grow. At times I was coming into international games off not kicking for my province.”

Sounds familiar. Carbery barely got a sniff of the kicking tee never mind first receiver responsibilities in his breakthrough season with Leinster.

“You have just got to keep practising. When I first started kicking I was just kicking the ball and hoping that it would go over. Whereas now I trust my routine and that practise and experience I am used to those environments now. Trust if I can get my cues right the ball is going to go where I want it. It is a matter of experience and every kicker has been there.”

Jackson was presumably sore all week. The ribs and shoulder were damaged when targeted by Japanese tackles in heavy traffic.

“I got destroyed on a couple of occasions. A few bit hits, which I usually stay away from, I think they were out to get me. They got a couple of shots on me but just glad I was able to stay on the pitch.”

At least another Jackson hour is needed at Tokyo stadium this Saturday.

“The 10 jersey means everything to me,” he added.

The team is expected to be at full strength – absent Lions considered – with the all out attacking Munster trio of Simon Zebo, Andrew Conway and Keith Earls meaning only two changes are expected in the backline.

Kieran Marmion may be a fraction ahead of Luke McGrath in the scrumhalf pecking order. McGrath has proven to be an outstanding rugby player while establishing himself at Leinster this season but he has a bit to go on the technical side to be considered an outstanding number nine. That call would be harsh on John Cooney as the Ulster-bound Dubliner is the only back not capped on tour.

Joe Schmidt has time and again gone back to Luke Marshall so the Ulster centre is expected to nudge out Rory Scannell with the Munster man covering outhalf and centre from the bench.

Garry Ringrose is nailed on at 13. And will be for a very long time.

His defensive work has been impressive in June; see the 49th minute last Saturday when, faced by a four on one situation, his back-pedaling at full speed goaded Japan openside Yoshitaka Tokanuga into ignoring the overlap. The covering Conway made the try-saving tackle.

Up front, Cian Healy, Niall Scannell and John Ryan should start again with James Tracy certain to feature while Andrew Porter has to be putting pressure on Finlay Bealham. Schmidt and scrum coach Greg Feek may want to send the converted tighthead back to Leinster with more than 30 minutes exposure to Test match rugby.

Same could be said about James Ryan but Kieran Treadwell appeared to do enough in his 19 minute debut against Japan to continue understudying for Devin Toner. Quinn Roux’s power and, finally, an injury free period has earned him a longer stay in the four jersey.

Roux did cough up three penalties in the 55-22 victory but he fractured several Japan attempts to get their maul rolling.

Backrow presents the most difficult conundrum. Does Schmidt call Sean Reidy up from Auckland yet not give him a single minute on tour?

Judging on form it is almost impossible to tell one from Jack Conan, Rhys Ruddock, Josh van der Flier and Dan Leavy they will not be togging this weekend.

Leavy’s “work rate was phenomenal,” according to Schmidt “and he won some really good collisions, especially against two-man tackles.”

“It’s a Test match,” said Schmidt when asked if a full metal jacket selection was coming, “You talk about the value of the jersey.”