Number one at number 10 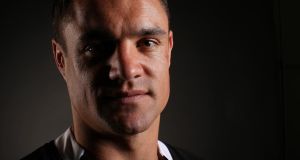 Dan Carter: With 1,409 points, no one has been more prolific in the history of test rugby

Hence, it was reassuring to again see his name included in the All Blacks squad for their end of year tour, in the particular hope that he pitches up at the Aviva, not least as we have to wonder whether we’ll see him again.

Certainly, we’ll never see his like again, and pound for pound he’s possibly been the game’s most valuable player in the professional era as well. With 1,409 points, no one has been more prolific in the history of test rugby, and he has been one of the game’s consistently outstanding players for 11 years. He’s also the highest points scorer in the history of super-12 rugby.

His career might be said to have reached a peak as far back as 2005, when a stellar year saw him deservedly crowned as the IRB world player of the year. In the second test against the British & Irish Lions in Wellington he scored 33 points in the All Blacks’ 48-18 win with two tries, five penalties, and four conversions. He came within a whisker of a third try and a 40-point haul (given he was having one of those nights were he could have landed a kick from row Z) thereby passing the previous All Blacks record of 18 points in a Lions test.

That realm
Yet the wonder is that 2005 was the only year he received the IRB award, for there has been so many performances within that period, along with his masterful accumulation of points with that prodigious left boot of his. After one of those innumerable place kicks, he’d shuffle back toward his team-mates with that curiously un-athletic, foot-dragging jog of his. Yet, with the ball in his hand he is a beautifully balanced runner who can glide through gaps with that deceptive burst of acceleration.

A brave and effective tackler too, Carter has also always been a wonderful game manager, with a complete array of deft grubbers, crosskicks, aerial bombs and long, raking touch-finders. Perhaps he hasn’t had the assured drop goal expertise of a Jonny Wilkinson or Ronan O’Gara, and certainly not off both feet like the former. But then the All Blacks have rarely been backed into such a corner that they’ve needed a last-ditch drop goal from Carter except, ironically, to beat Ireland in the second test in Christchurch last summer.

When fit and well, he remains world class, but therein lies the rub. This year alone he has been limited to just three All Blacks appearances after suffering a broken hand, a calf strain and a damaged shoulder sustained in the home win over South Africa after Bismarck du Plessis had launched himself at the All Blacks outhalf like a human missile. Romain Poite was widely condemned for the yellow card which he brandished at the abrasive Springboks hooker, especially as a second yellow equated to a sending-off, which perhaps tells us more about the state of the game. Thankfully, Carter has recovered on schedule to make the tour.

Last year a hamstring strain ruled him out of the third test against Ireland, and a calf injury ruled him out of the Rugby Championship clashes against Argentina and South Africa. Swelling in his achilles saw him sit out the encounter against Wales in Cardiff on their end-of-year tour.

Due to the gulf in class between Carter and the back-up New Zealand number 10s, his workload bordered on the excessive.

His move to Perpignan for the second half of the 2008/09 European season (allegedly worth €700,000 for a seven-month contract), followed a calendar year in which he played all 15 of New Zealand’s test matches. But he tore his achilles tendon with Perpignan, so only played in five games with the Catalans.

Most of all, of course, there was his cruel groin injury a day before the All Blacks’ final pool match against Canada at the 2011 World Cup which cast a pall over New Zealand and, indeed, left an abiding regret over the rest of the tournament for all true rugby fans (this had followed a 2010 year featuring 10 tests for the All Blacks).

Supreme guidance
That should have been Carter’s coronation, the playmaker supreme guiding his rugby-obsessed nation to a first World Cup in 24 years on home soil. In that training session Carter was merely practising his goal-kicking, something he’d done most days since he was a kid without a problem. Perhaps Carter was in some way afflicted by the nerves, tension and huge expectations upon him in that World Cup.

The sense of panic which gripped New Zealand for the remainder of the tournament was not assuaged by the form of Carter’s anointed deputy, Colin Slade, who himself suffered a groin tear in the quarter-final win over Argentina. Aaron Cruden then lasted until the 34th minute of a nerve-jangling final against France before succumbing with a knee injury. It fell to Stephen Donald, called up from a fishing trip as a replacement a fortnight earlier, to make his World Cup debut and land the winning penalty in that 8-7 win.

Donald has since made the dash for cash at first Bath and now in Japan, but latterly the thought of an All Blacks teamsheet without Carter at number 10 no longer engenders anything like the same sense of panic. With good reason too, as they have completed an, at times, brilliant clean sweep in 10 tests in 2013 – three against the French, all six in the Rugby Championship and finally in their Bledisloe Cup win over Australia in Dunedin – with Cruden starting six of them.

Beauden Barrett has proven himself to be a highly effective in his nine appearances off the bench this year, notably in the two wins over South Africa, while the 24-year-old Tom Taylor, long regarded as Carter’s successor at the Crusaders, was chosen ahead of Colin Slade when Carter, Cruden and Barrett were ruled out of the game against the Wallabies in Wellington in August.

Cruden, Barrett and Taylor have all been named along with Carter on this tour, with Steven Hansen and co obliged to have one eye on the future. Emulating his equally iconic teammate Richie McCaw (who perhaps had Brad Thorn in mind), Carter will take a six-month sabbatical from the game after this tour, thereby missing most of the Crusaders Super 15 campaign and the All Blacks June tests against England.

Understandably this break is to hopefully help him fulfil a burning ambition to make the 2015 tournament in England.

“Ultimately, I want to play in the next Rugby World Cup in 2015,” he explained. “To do that, it’s important that I put myself in the best possible position, both physically and mentally. When you play the game full-time at this level it does take a toll on your body. I’ve had a few injury niggles over recent years, so I’m keen to ensure I do everything I can to recover fully from those and prolong my career.”

And after what befell him last time, no-one would begrudge Carter that much.