Monaghan expect the hill to get steeper after Down drubbing 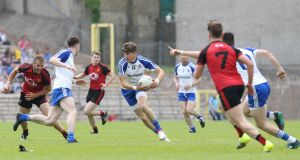 Darren Hughes in action for Monaghan against Down. Photograph: Andrew Paton/Presseye/Inpho

The constant gathering of scores as Monaghan ruthlessly dismissed Down on Sunday drew an immediate comparison to Dublin.

Such high praise seems unwarranted a few days later. Still, Malachy O’Rourke’s team, after their 2-22 to 0-9 victory, must be considered a genuine force in 2016.

“The media haven’t mentioned us and we don’t mind that,” smiled Darren Hughes under a blazing Clones sun. “We’re Ulster senior champions and under-21 champions so we feel we’ve a good enough crop of players and I think we’ve proved over the last four years that we’re competitive.

“Our goal is to retain an Ulster championship but you have to take every game as it comes because you generally don’t get anything too easy in Ulster.”

After Down’s inept performance, that last sentiment hardly rings true. “I think when you look at it now, the five teams left in the Ulster championship [Tyrone, Donegal, Fermanagh, Cavan and Monaghan] are probably the best five teams, so the next day you go out is going to be a different task,” said Hughes.

“To be honest, I don’t think there’s much between any of the teams left in it.”

The wonder remains how seriously Monaghan can be considered All-Ireland contenders considering the dip in standard of the previously perilous Ulster championship. The accepted narrative being that Monaghan won an easy title in 2015.

“We’ve played well in games before and didn’t win Ulster titles,” said Hughes. “You’ll take the medal at the end of the day but we know our flaws.”

There is an admirable ruthlessness to the way Monaghan now play, the professionalism of their preparation now guaranteeing a performance befitting their talents.

“We probably feel we won an Ulster title last year without being great. We were probably lucky to pull away from Cavan in the last 20 minutes, pulled away from Fermanagh in the last 10 minutes and never scored for 22 minutes against Donegal in the final.

“So we know we have our flaws and we’ve spent a lot of time since December, January getting them ironed out.”

It is one or the other. Monaghan are growing at the rate of knots or Ulster football is in steep decline.

“It’s an Ulster championship game so we knew it was never going to be easy.”

And yet it was far too easy.

“Ah here, we talked about that during the week. We knew Down hadn’t won a game so if we could get in amongst them we knew their heads would drop.

“We knew we just had to perform, we were the better team, and it showed in the second half. But I think from next week on things will start to spice up a bit.”

By that, Hughes means Fermanagh versus Donegal in Ballybofey will provide a competitive contest befitting the province’s reputation.

McFarland reflects on a job well done 19:34
Glasgow slam European door shut on Munster 19:38
Wexford strike late to see off Galway 18:37
Ulster huff and puff their way past Bath and into the quarter-finals 18:09
Haaland hits the ground running with hat-trick on debut 17:44
Here is your handy guide to sport on television this week