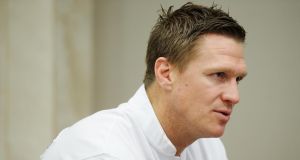 South Africa captain Jean de Villiers has been out since November after suffering a serious knee injury against Wales in Cardiff. Photo: Feng Li/Getty Images

Jean de Villiers feared he may never walk again when he suffered a serious knee injury in November, yet five months after the incident, the South Africa captain is targeting a July return after what he describes as a “miracle” recovery.

De Villiers was sidelined in the Springboks’ 12-6 loss to Wales in Cardiff at the end of their European tour, with immediate concerns believing the centre would not be fit for the World Cup in England that kicks off on 18th September.

While those worries still remain in some quarters, an upbeat De Villiers believes he is just two months away from a return to action.

“The way I’ve recovered these last five months has been nothing short of a miracle. When I was laying there on the Cardiff turf in severe pain, I thought to myself I’d be lucky if I ever walk again,” De Villiers told Afrikaans news website Netwerk24.

“But the specialists and medical personnel have performed wonders and they even made use of artificial ligaments to help rebuild my knee.”

The 34-year-old said surgeons literally ran out of spare body parts to fix the ligaments in his knees after previous problems.

“I’ve had six knee ops and what they usually do if you’ve got an ACL (anterior cruciate ligament) rupture is either take your hamstring or quad tendon and use that as a graft to put into the ligament. In my case, my hamstring tendon was used already, so was my quad tendon,” De Villiers explained.

“The other side’s hamstring tendon was also used as well. The PCL (posterior cruciate ligament) was also off, so they took artificial ligaments and put that in the ACL and PCL.

“I tore my ACL, PCL, MCL (medial collateral ligament), had a Patella dislocation and a hamstring (tear)... but the rest was fine.”

De Villiers added that he may opt to make his return in club rugby in Cape Town.

“I want to get a bit of game time in early July... the problem being that there isn’t much rugby going on in July,” he said.

“Super Rugby finishes in July and Currie Cup only starts in August. So we’ve got a situation where I may have to play club rugby. Test rugby is a bit too difficult to go into straight away. The risk of club rugby, though, is probably more.”

South Africa have been drawn in Pool B at the Rugby World Cup, alongside Japan, Samoa, Scotland and the United States.