Michael Cheika: ‘One of the big things we want to bring is honesty’ 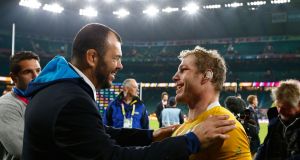 Not exactly La Bombonera but for this night Twickenham’s groove was nothing like a rugby stadium. The 80,025 crowd was riddled with passionate Argentineans and plenty of cranky, worried Aussies.

There are moments in every game that can change what seems inevitable.

When these moments came, Argentina were unable to nail down the tries required to continue rattling rugby’s world order.

Michael Cheika’s structurally sound, experienced and well-prepared Wallabies did to them what they did onto Ireland a week beforehand.

But what made this such a special happening was Los Pumas unbreakable spirit. It was finally fractured just enough by a wondrous Drew Mitchell run – he being one of Cheika’s Giteau rule returnees – which was finished off by Adam Ashley-Cooper completing a hat- trick of tries.

But it took 71 minutes of far-too-loose rugby for the former Leinster coach’s liking.

“We let them back in it,” said Cheika.

Australia’s start was perfect. At 1.09 on the clock Rob Simmons dived over the try line after intercepting Nicolas Sanchez’s reverse pass.

Cathal Garvey from the UL Bohemians think-tank, now a Wallaby analyst, might get some credit for highlighting that early preference by the Argentine outhalf.

Lull a studious defence into a sense of certainly about what you intend doing, then catch them cold with Bernard Foley’s cracking left-handed skip pass to Ashley-Cooper.

The sight of Diego Maradona briefly elevated every South American to a state of delirium. They were sobered up by the sight of a dazed Juan Imhoff being helped ashore.

Before captain Agustín Creevy hobbled off – he hadn’t trained all week – Wayne Barnes left his distinct mark on proceedings.

It’s not up for debate that Tomas Lavanini didn’t wrap his right arm when chopping Folau. “Yellow card offence,” was Barnes’s first idea. TMO Ben Skeen offered the Englishman an exit strategy: “Here’s it in real time, Wayne, and the wide angle.”

Wayne looked up and even said: “Maybe give the player the benefit of the doubt.” Common sense was about to prevail until Barnes suddenly turned, marched over to Lavanini and blazed the yellow card to high heaven.

“Tomas stretched his arms, there is a huge impact and he couldn’t close his arms,” said coach Daniel Hourcade. “We have to respect this decision.”

This was when we saw the difference between Australia with and without Folau and David Pocock. The latter’s perfectly timed smash on Juan Martín Hernandez after five minutes ended El Mago’s input by the 43rd.

Sanchez’s five penalties cut into the the lead but the chance so magically created before half-time simply had to become seven points.

Phenomenal foot work by little Santiago Cordero left Ashley-Cooper and Mitchell flailing, but the supporting Hernandez’s one-handed fling went behind Joaquin Tuculet with the line at his mercy.

No Creevy, Imhoff or Hernandez and seemingly no hope, yet Argentina remained loyal to their attacking philosophy that got them to Twickenham in the first place.

Problem was Australian nous. The only team to beat New Zealand in 2015 have the ability to slow almost every attacking opportunity – mainly because of Michael Hooper’s tentacles. But this remained a genuine battle befitting of a World Cup semi-final. That is until Mitchell’s run justified his journey from Toulon exile.

A savvy media operator, Cheika easily deflected the great revival theory that was laid at his feet afterwards.

“I don’t like going with those clichés, the winning team and all that . . . One of the big things we want to bring is honesty and let that be seen by the way we play the game. Not talk about doing certain things and try to market that or promote it. Just be honest, work hard, earn the respect of people.”

But this victory comes at a price. Ironically Pocock’s kamikaze tackle on Amorosino, while essential, as an offload meant an Argentina try under the posts, put Folau’s dodgy ankle in a new bind. Scott Fardy and Giteau also hobbled off, while Hooper and Pocock looked battered by the end. Just as Steve Hansen had hoped, Argentina did New Zealand an enormous favour.

What’s left in the tank? “Probably about 80 minutes,” went Cheika with that crazed yet controlled smile.