Michael Cheika: I cried when I heard about Phil Hughes

Australia batsman Hughes died on Thursday, two days after being struck on the head by a bouncer 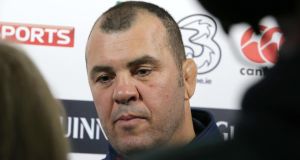 Michael Cheika of Australia: “I just want his family back home to know that we care.” Photograph: Dan Sheridan/Inpho

Australia head coach Michael Cheika wants the family of Phil Hughes to know that his team care and are touched by the cricketer’s tragic passing.

Australia batsman Hughes died on Thursday, two days after being struck on the head by a bouncer in action for South Australia against New South Wales.

The Wallabies will wear black armbands in Saturday’s England clash at Twickenham.

“I’d never met Phil but when I heard about it I cried because there’s something that touches you about it, how unfortunate it is,” said Cheika.

The international batsman was struck on the neck by a short-pitched delivery when batting in a domestic match on Tuesday, with the force of the blow piercing his veterbral artery, medical staff said at St Vincent’s hospital where he was treated.

“I just want his family back home to know that we care,” added Cheika.

Preparing for his team’s final test of the November series Cheika says that he is ready to “weather the storm” if Australia slip to their worst northern hemisphere tour since 2005 with defeat to England.

The Australia boss said he has had plenty of experience of criticism early in coaching stints and is ready to shrug off any criticism of his embryonic Wallabies tenure.

“I have been involved in too many teams where I have been slagged off early days and have been able to come back later on,” said Cheika.

“So I know you just have to weather that storm.”

The former Leinster coach dabbled in a spot of mind games over his side’s scrum, claiming England will have the “more tactical” set-piece.

Cheika responded by hotly denying any suggestion his side try to “milk penalties” at the scrum.

Australia are bidding to avoid a third straight loss this weekend, following slender defeats in Ireland and France.

Dual Waratahs and Wallabies head coach Cheika only assumed the Australia role in the wake of Ewen McKenzie’s resignation at the tail end of the Rugby Championship.

The 47-year-old has had to mop up the mess from the Kurtley Beale text message scandal that led to business manager Di Patston’s resignation.

Only then could Cheika kick-start the process of building his new regime, with Beale reintegrated after a hefty fine and ban: but the new boss is refusing to explain away his side’s patchy form.

“I am not an excuse maker: I am not saying we are doing this tour just to develop and grow and all that business,” said Cheika.

“I understand what is required around results, but I can’t make the results come by just snapping my fingers either.

“It is about me knowing what I need to do and prepping the team and then backing the team to try to bring that game out every time they play.

“Obviously it has been a short period of time so everyone is getting the gist of what we want to do together and believing in that.

“By believing in that and not panicking when someone wants to drop that tag on you, saying ‘this is what I believe in’, that’s when the results will come.

“I am a firm believer in that.”

Wallabies boss Cheika revealed he cried when he heard the news cricketer Phillip Hughes had died after being struck by a ball.

Turning attention to the pivotal set-piece contest in Saturday’s clash, Cheika threw out the notion of Australia playing for penalties at the scrum.

“I definitely think they’re going to target us there, that’s for sure,” said Cheika.

“They are probably more tactical than we are at the moment: they turn and wheel and move to the left.

“I’m sure they expect that they are going to dominate us, but all that talk they carry on about — that we are trying to milk penalties and that kind of business — it’s all irrelevant at the end of the day.

“They are too smart for that these days, referees; they do their homework and watch the games.

“Maybe I’m naive but we are scrummaging to win the ball so we can attack.

“We’re certainly not scrummaging to get a penalty. For what? So we can kick the ball out and get a lineout?

“Let’s the get the ball there and then, and play with it. That’s an attitude I’ve always had as a coach and I want to keep.”