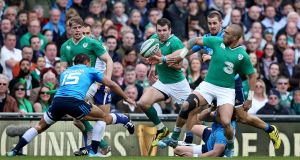 Jamie Heaslip’s first try was an absolute belter. The offload from Simon Zebo (above), like all offloads, shattered the Italian defensive structure. Photograph: Dan Sheridan/Inpho

Many years ago I had the great privilege of listening to a coach’s cautionary tale from the great Australian cycling coach, David ‘Charlie’ Walsh.

Charlie is a legend in cycling. He was the head coach of both track and road cycling at the Australian Institute of Sport from 1987 to 2001, Olympic cycling coach at six Olympic Games and 15 senior world championships. Under his stewardship Australia rose to world number one in track cycling.

In the late 1990s he told a clutch of young rugby coaches, who were hanging on his every word, about his four-man pursuit team that won Australia’s first world championship in 1993. Immediately after the race, still in their racing uniforms, the team captain called the group together. He told them to put their hands into the middle of the group and, right then and there, commit to winning the world championship again the next year.

The team screamed their agreement.

The next season, the team followed the exact same training programme that won them the world championship. Their track times were faster than the previous year. They trained with more enthusiasm and greater determination.

They went to the World Championships in 1994 full of confidence . . . and came third. Charlie’s lesson was that once a coach thinks he has all the answers and a perfect programme, his team is beaten. He reasoned that there is always an opponent, thinking harder and smarter than you.

Unless you constantly grow and adapt, you will fail. Charlie advised us, evolve our teams, or die.

Last Saturday Ireland looked like the amphibious creature known as the mudskipper, which is a strange mixture of a half fish and a half frog. A creature that is an evolutionary freak.

Like the mudskipper, Ireland are attempting to evolve their attacking play, but are not quite there.

Jamie Heaslip’s first try was an absolute belter. The offload from Simon Zebo, like all offloads, shattered the Italian defensive structure. At other times Robbie Henshaw and Ian Madigan’s footwork left defenders tackling shadows. It was great.

It was also delightful to see Johnny Sexton flattening his alignment and attacking the short side. His flat attack that sent Andrew Trimble over was the Sexton of old. Sometimes a 50-point romp can provide the spark in confidence that a string of losses squashes.

The other pleasing aspect of Ireland’s game was the simple fact that the forwards were running onto the ball at pace. Against England, the Irish forwards were accepting the pass from the scrumhalf while standing still. The English defenders knew who was getting the ball before the ball-carrier received it. Against Italy, the Irish ball-carriers had purpose, pace and some venom in their running.

However, Ireland’s attacking problems are a long way from being solved.

Ireland must change their attacking shape and have their strike runners standing in formations that do not make it so obvious who is going to receive the ball. At present the defenders can put two and three tacklers on the ball- carrier because they know who is getting the ball before he gets it.

While giving credit to parts of the Irish attack, we must keep in the front of our thoughts that the Italian defensive display was worse than pathetic. It was embarrassing. The look of utter frustration and despair on the face of Sergio Parisse at full-time was very hard to watch. An all-time great was humiliated by his team-mates.

To Ireland’s credit they scored 50 points against Italy because that is what the Italians deserved.The Scots will be a very different animal.

Vern Cotter has the Scots playing with real confidence and passion. He has assessed the talent and skill level of his players and has designed a gameplan that maximises their strengths and minimises their weaknesses. Their results give witness to the fact that not only have the Scots two excellent wins, but their losses have been close.

If Scotland bring the same attacking mindset to Dublin that they brought to Cardiff against the Welsh, they will be more than a handful for Ireland.

After the Scots, Ireland have six more games in 2016. One against Australia, two against New Zealand and three against South Africa. It is not beyond reason that by the end of 2016 Ireland may only defeat Italy in the calendar year. This would put the team with one win and 10 defeats in 2016. A position that is almost impossible to imagine from the excellent play that won the championship in 2014.

The final part of Charlie Walsh’s cautionary tale for coaches, is that after coming third in 1994, Charlie spent a long time rethinking his plans and tactics for his pursuit team. With almost the same team that won the bronze in 1994, but with a lot of new thinking, his team won the 1995 world championship gold.

Joe Schmidt would do well to have a chat with Charlie, because Joe’s game plans from 2014 that delivered gold for Ireland has failed in 2016. The players are trying their guts out, but the systems are letting the team down. New thinking is essential.

Like Charlie in 1993, I believe Joe and his coaches thought, that after some great wins, they had all the answers. Well, that was wrong. If Ireland are one and 10 in December 2016, or even two and nine, the team will be looking for a new coach.

Evolve or die. Change and grow or be overtaken.

We will all observe the evolution or destruction with great interest.

1 Should fans be allowed drink in the stand at sporting events?
2 Gerry Thornley: England primed to show their best against Ireland
3 Frank Lampard says Harry Maguire should have been sent off
4 Stopping Jonny May’s pace must be high in Ireland’s priorities
5 Tipping Point: Eddie Jones’s rhetoric is out of place in a febrile political climate
Real news has value SUBSCRIBE

Frank Lampard says Harry Maguire should have been sent off 06:36
Willie Mullins prefers to ‘keep it simple’ and run Benie in Mares Hurdle 06:00
Stopping Jonny May’s pace must be high in Ireland’s priorities 07:14
Monaghan and Mayo face off with relegation a real prospect 06:00
Should fans be allowed drink in the stand at sporting events? 06:00
Here is your handy guide to sport on television this week