Matt Williams: Too much focus on game with England – Scots can’t be dismissed 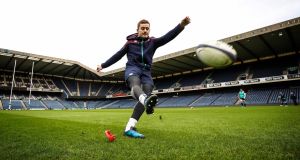 There is a fresh excitement surrounding this year’s Six Nations.

The excitement is not just for the event, which is so joyously anticipated by every fan, but there is a real expectation of a resurgence in an attacking and entertaining style of play from Northern Hemisphere teams.

In terms of quality, the last two Six Nations have been close to the worst of the professional era.

The English can hardly believe their success at playing the running game, having won a series in Australia for the first time. Ireland defeated South Africa at home for the first time, then backed it up with historic wins against New Zealand and Australia. In November, Italy defeated the Springboks for the first time and both the Scots and the French have played greatly improved attacking rugby and pushed the Southern Hemisphere teams right to the wire.

The rugby minds that drive strategy in the north have finally realised that scoring tries is what wins games in modern rugby.

Welcome to the 21st century, lads.

Even the Six Nations guiding committee had “a road to Damascus” moment and have been converted to the side of the “light”.

They have instituted the bonus-point scoring system into the Six Nations for the first time. A system that has been in use in the Southern Hemisphere for 20 seasons.

I applaud the decision. It will encourage teams to run the ball and score tries. I acknowledge that governing bodies should not rush into law or competition structure changes rashly, as the law of unintended consequences does come into play . . . but 20 years?

Bill Clinton was in the White House in his first term when the south started being rewarded with a bonus point for scoring four ties.

To the many “flat earth believers” who oppose the change to the competition scoring system, many of whom also opposed professionalism, lifting in lineouts and bringing Italy into the Championship, all I can say is that Neil Armstrong did walk on the Moon, Elvis is dead and scoring tries wins game of rugby and entertains lovers of the game.

Suck it up, bonus points for tries is here to stay.

While the “good vibrations” surrounding running rugby are being felt in Ireland, as they rightly believe a championship win is possible, too much focus has been given to defeating England alone.

Scotland are not to be dismissed. They are playing some of their best rugby since the 1990s.

Scotland have brought energy and a much improved pool of talent into their recent performances. In particular they are punishing opposition errors. Loose passes or kicked balls that are allowed to bounce are being swooped on and counter-attacked by the Scots.

For Ireland, the loss of Sexton to injury would be a huge blow to any team in the world. Yet Paddy Jackson continues to improve and his experience in South Africa will add to his belief that he belongs in the Test match arena.

It is the selection of Garry Ringrose and Robbie Henshaw that excites me. The shadows cast by the two greats, Brian O’Driscoll and Gordon D’Arcy, were giant. Replacing true greats is impossible as nothing grows in the darkness of a shadow. It has taken a few years of sunlight for these two fine young players to grow into international players.

Ringrose has impressed me since day one. He has power, composure and his lightning footwork oozes class.

Henshaw’s development into a quality international centre has been steady and positive. Both complement each other and are growing in their understanding of each others’ play. They are becoming a high-class combination, something that was glaringly absent from Ireland at the last World Cup.

I have criticised Joe Schmidt in the past for his selections at the pivotal 13 position, but this selection is correct, brave and reeks of the future.

An exciting, reinvigorated Six Nations Championship opens with a tough, physical and engrossing day at Murrayfield, where victory is open for both teams.

Irish rugby lost one of our best this week. I was deeply saddened at the passing of the great Professor Arthur Tanner, the long-time Leinster team doctor.

For so many players and staff from Leinster, Ireland A and the Irish teams, Arthur was much more than our team physician. Arthur was not only a gentle, wise and gifted medical genius, he was our dear friend and mate.

Giving service to generations of the Leinster team, Arthur cared, counselled and supported not only the staff and players, but also their families. I vividly remember when my own daughter, then only five years old, had suspected meningitis. To see Arthur in full medical flight was a reassuring sight to behold.

To sit with “ the Prof”, sipping an impeccably good red wine that he had chosen and chatting about topics as varied as his attending the famous Woodstock concert, to his love of cars or his beloved family, was one of life’s great pleasures.

I know I speak for all the Irish rugby community in passing on to all the Tanner family our deepest sympathy and support.

“Prof”, you will be deeply missed.