The Irish rugby team recieve a hero's welcome as they arrive back into Dublin Airport after their Six Nations win. Video: Ronan McGreevy 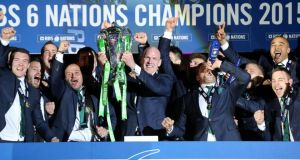 Entrepreneurs are masters of assessing the risk and reward equation. What will I gain for what I am being asked to risk?

On Saturday, the reward for teams to run in tries was huge. It was “winner take all”, so the entrepreneurial coaches risked a lot. What we, the public received, was scintillating running rugby. It was a revolution in style and content from the previous, grim, four rounds.

I was mesmerised by the glorious attitude of the teams.

The points-scoring system of the Six Nations has not changed since the 1800s, so in previous rounds there were only two points on offer. The coaches had little to gain from playing attacking rugby, so they risked very little.

In Rome, London and Edinburgh, there was the proof that running rugby in Six Nations games can be wonderful to behold. On Saturday, the style of rugby played was equal to anything in the south.

To all of those who have been “haranguing” me with their excuses on why in Six Nations rugby you cannot possibly play running rugby – because . . . of the weather, the tradition, the games are too tense, the referees are different – the weekend’s games proved that those excuses are a crock of lies.

So all of you burdened and weighed down, with those ancient feelings of northern hemisphere guilt and inhibition, you are now free to cast off your yoke of a kicking game.

The time has come for the Six Nations to adopt the same points-scoring table as their rivals in the southern hemisphere championship. The bonus-point system, that has been in use since 1995, encourages teams to score tries.

If the system that is used in the southern hemisphere was applied to this year’s Six Nations, the end table would look a lot different.

It gives four points for a win and a single bonus point for scoring four or more tries or by losing by less than seven points.

England would have won the Six Nations with 18 points. They gained two bonus points for scoring more than four tries twice.

Wales would also have 18 points, with two bonus points from scoring four tries once and losing by less than seven once. Wales would have been second on differential.

Ireland would have come third on 17. They would receive the solitary bonus point from scoring four tries only once.

This system would encourage teams to run the ball and score tries, long before the winner-take-all mindset of Saturday.

Ireland won the Championship because they got their sums spot on, not by scoring tries. Ireland only scored four tries on Saturday compared to seven by England and eight by Wales. They remain fourth overall in the try-scoring tally.

Ireland’s success was based on magnificent defence. They let in a tiny 56 points with England the next best, with almost double, at 100.

At Murrayfield, it was not so much the points Ireland scored but the rock- like wall of tacklers that stopped the Scots eroding the all-important differential.

While England and Wales played Barbarians-style rugby, they also leaked soft points. Ireland were professional and calculated in maintaining the thinnest of winning margins.

All great teams have great defence. Les Kiss, take a bow. Well done, mate, you have done an outstanding job.

Alongside Victor Matfield, he is the best exponent of the lineout the game has ever produced. His amazing durability to constantly carry the ball and make crushing tackles is simply magnificent. He is a motivation to us all.

To see his smile while holding the trophy aloft was a just reward for an incredible commitment to Irish rugby.

It is also another great achievement for Joe Schmidt and his team.

Who would have thought this day would ever arrive? Running rugby at every Six Nations match. Ireland, back-to-back Six Nations champions, with a real chance to win the World Cup. I have always believed in miracles because in my experience, sometimes, they do occur.