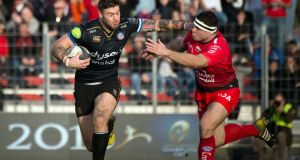 Mathieu Bastareaud was left out of the France squad for the Six Nations on Tuesday when new manager Guy Noves named 31 players and promised a new era of attacking rugby.

“We want to build a team who will be able to improve a lot, and not taking players who would not be with us in two or three years,” Noves told a news conference.

“We want to make the French people who will support us happy.

“Mathieu Bastareaud’s talent is obvious. He’s not being left out because of a lack of talent but the true question is whether his profile fits our game plan,” Noves said.

Outhalf Francois Trinh-Duc was also left out but only because he has just resumed training with Montpellier after an injury.

“He knows he is part of our project,” said Noves, who picked Jean-Marc Doussain and Jules Plisson. Maxime Machenaud and Morgan Parra are the two scrumhalves.

“Don’t expect too brilliant performances from the youngest players,” forwards coach Yannick Bru warned. “But Guy will not throw them all at once on to the field.”

“With the right attitude I believe we can get results,” said Noves.

France start their Six Nations campaign at the Stade de France against Italy on Febuary 6th.