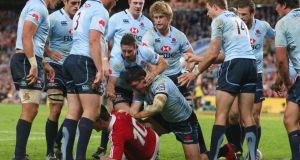 The announcement of the Lions team to play the ACT Brumbies tomorrow in Canberra is not as interesting in itself as the names who aren’t included – thereby signalling the likely composition of the first Test team to play the Wallabies next Saturday. As is usually the case for the final midweek game before the start of the Test series, being picked for this one looks like the shortest of straws.

Then again, you would never discount Warren Gatland from pulling a rabbit out of the hat, if not quite on the scale of hiring Shane Williams for a day, who was en route from his playing stint in Japan for his TalkSport radio duties on this tour.

Furthermore, presumptions regarding the Test XV are complicated by the raft of injuries which have afflicted the midfield and outside backs. Pending the outcome of a scan which is likely to exclude the hamstrung Jamie Roberts, Warren Gatland yesterday also admitted that George North’s tight hamstring means that “to be honest he is less than 50-50.”

If not then Simon Zebo is vying with Sean Maitland for one of the wing spots along with Alex Cuthbert.

Roberts’s injury hardens the likelihood of Jonathan Davies partnering Brian O’Driscoll in midfield outside the Mike Phillips and Jonny Sexton, with last Saturday’s starting pack all excused duty in Canberra, although one still wouldn’t rule out any of Alex Corbisiero, Richard Hibbard and Dan Lydiate from pushing their way in. Sean O’Brien’s inclusion from the start suggests he may pay for his versatility with a place on the bench on Saturday.

The Lions maintained their unbeaten run with Saturday’s 47-17 win – their biggest in 21 meetings over 125 years with the Waratahs – by largely keeping the same patterns of play. But, aside from a surprise selection, intriguingly Gatland hinted at one or two in style two.

“Potentially. We’ve made sure we haven’t shown our hand in certain things as well and that hasn’t always been easy – trying to keep a few things in the locker, that we’ve been working on in training and not showing them during games, that we’ve been planning. Hopefully we can keep them guessing in terms of what the team is going to be and what type of game we’re going to play.”

Rory Best becomes the third Irish captain of the tour but it says everything about how the frontline three-quarters – at any rate those left standing – are being wrapped in cotton wool that tomorrow’s quartet are all tour debutants. Three were still airborne en route to Australia when the line-up was announced and a fourth landed on Saturday.

In addition to Williams, the newly arrived Billy Twelvetrees will be joined by two other weekend call-ups from England’s tour of Argentina, Brad Barritt and Christian Wade. Given they will have one captain’s run together and will still be suffering from jetlag, it’s safe to presume that this will be Gatland’s most vulnerable and ill-prepared team of his coaching career, never mind the tour.

“I’ve said all along, this tour was about the Test match, and if we dropped one or two games along the way I was willing to sacrifice that to win the Test series. No one is going to remember if we win all the other matches and lose the Test series.

“It’s all about winning the Test series so you’ve got to be prepared to make a couple of tough calls and if that means dropping a game or two on the way because of that, we’re prepared to do that. If we don’t turn up on Saturday with the best possible chance and everyone fit and fresh, I don’t think it’s fair on the rest of the squad or the players or that jersey.”

It’s not the strongest Brumbies team Jake White has ever put on the pitch either. Two of their seven Wallabies members, Peter Kimlin and Scott Sio, have been released for this game but their bench features a couple of debutants in props Chris Cocca and Jean-Pierre Smith, whose twin brother Ruan will start at tighthead.

The story of the match is Clyde Rathbone who played South African under-20s before migrating to Australia with his family, whereupon the Brumbies picked him up. He became a Wallaby but suffered from depression which cost him his Test career, but he’s fought his way back this season after missing three years in the game.