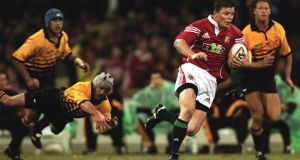 Whatever about logistically or climactically, financially it makes abundant sense for the Lions to stop off in Hong Kong en route to Australia. Whereas the hard-pressed Australian Union will make an estimated £80-90 million from pocketing all the TV and ticket sales due to a six-tour accord agreed in the ’90s, the Lions need today’s game in Hong Kong to help accumulate the comparatively modest £5 million profit they generate for, and share equally among, the four Home Unions.

Similarly, so it was that the Lions hosted Argentina in Cardiff eight years ago and that HSBC is one of the Lions’ array of sponsors assuredly explains the Hong Kong stop-off.

The estimated cost of this tour is £14 million, the highest ever, so to turn over a tidy profit is testimony to the Lions’ marketing strategy and why, of necessity, the sometimes unedifying degree to which the Lions have become a commercial juggernaut.

The current agreement, which was struck between the four Home Unions and the three Sanzar nations, was before the 1997 tour to South Africa, when the whole Lions concept was so threatened by the advances of professionalism and the World Cup in an increasingly over-crowded rugby calendar.

The Lions needed safeguarding, but not anymore, and it seems safe to presume that come the next round of negotiations, the Lions will be able to demand a fairer share of the gate receipts and TV monies. All changed, changed utterly, with that ’ 97 tour.

Not only did the Lions win the series 2-1, but the captivating DVD Living With the Lions re-launched the brand and became a reference point for the vast majority of present-day squad members and supporters alike.

In 2001, something else momentous happened in turn. When the Lions and the Wallabies entered the floodlit Gabba for the first Test, they did so to a sea of red. Out-classed and out-supported that night, when Waltzing O’Driscoll was born in light of his sensational 50 metre try through the heart of the Wallabies backline, Australia resorted to all manner of deeds to overturn the series, which they did.

Come the third Test at Stadium Australia in Sydney, home supporters had been encouraged to wear yellow while vast swathes of red-clad fans were accommodated in darkened upper tiers. New Zealand and South Africa were also were also forewarned and forearmed of the 30,000-strong Lions invasion, as will Australia again this time around.

The tickets were reputedly sold out in 15 minutes. Far from an acronym of the amateur age, the Lions are a cash cow, and thus safer than ever, witness how their impending arrival is set to revitalise the wilting brand of rugby union in Australia. The Lions have also had another attractive string to their bow. They keep losing.

Lost the full cycle
Since 1997 – when the Springboks declined to select a specialist kicker and thus lost a series in which they outscored a Lions team that somehow accommodated Neil Jenkins at fullback by ten tries to three – the Lions have lost the full cycle. Of the three, ’01 was the one that got away.

The Wallabies may have been the reigning World Cup champions but the Lions had a core of a golden English generation which would win the 2003 World Cup.

Each side scored seven tries in the series, but having beaten the Wallabies 29-13 in the first Test, the Wallabies stormed back in the second and won a titanic decider which hinged on Richard Hill’s departure at half-time, Jonny Wilkinson throwing an intercept pass at the start of the second-half and ultimately Justin Harrison pinching a close-in Lions throw from Martin Johnson.

Drawing too heavily on that fading generation four years later, Clive Woodward’s daft-as-a-brush, over-populated odyssey actually became a benchmark for how not to do it.

That said, he had little luck, and once Lawrence Dallaglio’s tour was scuppered in the second game against the Bay of Plenty, not to mention the fate that befell the squad’s other totem, Brian O’Driscoll, in the opening exchanges of the first test, it’s doubtful Houdini could have engineered an escape plan thereafter against a close to vintage All Blacks side.

Even so, enlisting Alastair Campbell as the Lions’ chief spin doctor and the PR overkill to Speargate contrived to put the winning side from the first Test into a vengeful mood for the second. Quite a trick.

In any event, that tour seemed to last a lifetime, and it seemed to rain from darkened clouds throughout the last week of that dead rubber in Auckland.

Again South Africa were reigning World Cup champions four years ago, but the Lions didn’t help themselves by making up to three selection mistakes in the tight five for the first Test before a second-half recovery fell just short and the second Test was lost by three points and tiny margins as well.

Back in Oz, a Test series looks the most winnable again. At any rate, were the Lions touring New Zealand, one ventures the reigning world champions would be hot favourites, and likewise the Springboks if to a lesser extent. The Wallabies have already lost the world-class David Pocock and, for the time being, George Smith, although with the cracking young duo of Michael Gill and Liam Gill in their ranks, this is one position they have ample cover.

Digby Ioane has had a knee operation which makes him doubtful for the first Test at any rate.

They also have off-field issues, hence the exclusion, for the time being at any rate, of Quade Cooper, presumably as a continuing fallout from his self-imposed exile and “toxic” remarks of last year, and the off-field problems of Kurtley Beale.

Injury profile
Ongoing concerns about Sam Warburton and Seán O’Brien apart, the Lions have a comparatively low injury profile, with some big players such as Paul O’Connell even making timely returns from injury.

A core of a golden Welsh generation, which has extended the Wallabies to a series of one-score games, are supplemented by the best of the rest, containing a core of wounded Lions seeking atonement and backed up by a coaching ticket headed by the shrewd Warren Gatland, who was an assistant coach four years ago.

They will also have had matches under their belt, unlike the Wallabies, come the first Test in Brisbane, which looks a must-win, for aside from everything else, in what condition will the Lions be in come the third Test in Sydney?

Furthermore, insomuch as the Lions are the ultimate ambition for British and Irish players, it’s sometimes easy to overlook how much of an ambition it is to play them and beat them for opponents who only have an opportunity to face them every dozen years – in other words pretty much once in a lifetime. For all their problems, compared to four years ago they now have five competitive Super 15 sides, the Western Force replacing the Western Australia team beaten 116-10 in the tour opener 12 years ago.

And the invasion of supporters only ups the ante for home players and country alike. It’s as if their very being or worthiness as a nation is being put on the line. Perhaps that also explains why things usually become a little feisty at times, even overstepping the mark into downright violence; recall Duncan McRae’s savage punching of Ronan O’Gara in the Waratahs game 12 years ago, the spiteful battle with Australia A or Nathan Gray elbowing Hill in the face, as well as Speargate.

You can also be sure that some of the Australian media, helped by former or current coaches, will be orchestrating campaigns against the Lions for perceived illegalities. And aside from a stronger scrum, with or without Cooper, the Wallabies also have an X factor, possibly more of a X factor than the Lions, be it Will Genia, James O’Connor, the brilliantly potent if defensively suspect ex-Rugby League, Waratahs fullback Israel Folau and more.

All in all, there are ample reasons why the Lions have completed an entire losing cycle in the southern hemisphere, not least inadequate preparation time at the end of a long and arduous domestic season, and the preparation time is even less adequate thanks to this week’s Hong Kong jamboree.

Yet, maybe, just maybe, the Lions can eke out a 2-1 series win. They’re certainly due one.

Rory McIlroy battles to stay in the mix as Patrick Reed leads the US Open 00:33
Sergio Agüero could be sidelined for another two months 22:32
Andre Wright steers Bohemians back to winning ways in Sligo 22:17
Brandywell stalemate does nobody any favours 20:50
Weekend Premier League team news 20:24
Crossword Get access to over 6,000 interactive crosswords