Gerry Thornley and Gavin Cummiskey dissect Ireland’s 25-9 victory over France in the final group game of Pool D. The result came at a cost with the injuries to key players such as Sexton, O‘Connell and Peter O’Mahoney . 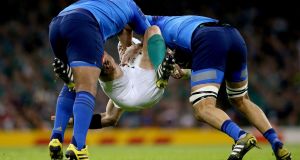 The risk is to list out all 23 Irish players and wax lyrical about their extraordinary performance. What harm? They were extraordinary and so too were the Irish management. But this would skim over the cause and effect of this performance and result. Why, for example, did Mathieu Bastareaud not run down the Irish 10 channel umpteen times? Why did his centre partner Wesley Fofana not glide through our inexperienced midfield?

The French have several starter plays but one in particular, as discussed on Friday, is key to answering the above questions.

Off a lineout, they get Louis Picamoles into the scrumhalf slot and do two things. On two minutes and 34 seconds, they attempted the first option: Picamoles engaged the ball, won in the middle of the lineout, and ignoring their peel around the tail to get Bastareaud into the 10 channel, they set out to hammer Ireland up front; that set the tone. But Ireland resisted and turned the ball over.

From then on France repeatedly set up the exact lineout but went for option two, with the intention of getting Picamoles around the corner to find Bastareaud.

Each time their lineout malfunctioned. But look at France’s second lineout. Look at the height Peter O’Mahony got into the air where his lifters momentarily lost him out of their hands. The French were loaded to attack the 10 channel but spilled over the back. Johnny Sexton spotted space, chipped over the top and, as France scrambled backwards while transitioning from attack to defence, conceded a cheap offside penalty. Sexton drills over for three points to open up the score board. Cause and effect. Not only was the French attack stifled, missing an opportunity to attack Sexton, they conceded three points after missing their opening two penalty kicks.

In losing this attacking platform, France were forced into narrow fringe rumbles. And boy were they powerful in gaining huge yardage. But yet again Ireland had prepared. They counter-rucked and forced the French ball placement to bobble and squirt out in any direction. Poor accuracy from the French but the Irish forced it – cause and effect.

On the flip side, Ireland’s point of contact moved further out than previous games. France got their best flow when bludgeoning around the fringes. Picamoles had a marvellous game in both carrying and defence, but Ireland’s big names – Seán O’Brien, Paul O’Connell, Tommy Bowe, Cian Healy – were all getting on the ball, stretching the French fringe defence. O’Mahony was especially good in nullifying the French.

Over time this opened the door for the first back receiver to feint going open but flying a flat inside ball, not to the man inside him but in front of his face to a blind runner. This is a management stroke or video nerd play. What do the French do off rucks when tiring? Ireland exploited – cause and effect.

It helped hugely when key players fell injured that players such as Iain Henderson arrived. And Henderson proved exactly what he is, a world class operator between the trenches of the secondrow scrum, the lineout maul, defending around the fringes and out wide, before grabbing the ball and gaining vital yards.

It was hardly a free flowing game. This was always going to be a war and both scrumhalves employed the box-kick where Sebastien Tilous-Borde and Conor Murray deserve huge credit for the amount of five-second hanging kicks that landed but 30 yards away. Ireland, having scored through Rob Kearney, fielded from the French restart. Watch Murray’s box-kick: count the seconds in flight and then watch Bowe catching above his head. Can you imagine the thousands of hours put into executing this one play? I wonder has Murray timed Bowe over five seconds, logged the distance and said no matter the pressure or field position if I get the ball to hang for five seconds and land exactly on target, Bowe will be under for the catch.

With this in mind watch France on the attack once more in hitting Yoann Maestri at the tail of the lineout, who on arrival to terra firma stuffed the ball into Bernard Le Roux’s belly. That Le Roux had lifted Maestri from the front put him in no place to receive. Jumbled play exploited by Ireland. So France brought a powerful scrum with Eddy Ben Arous at loosehead scrummaging and powering around the pitch.

In a match that asked everything of the players, Mike Ross gave superb set-piece solidity, Devin Toner showed his aerial prowess, and Rory Best battled bravely on the deck with Ireland’s six and seven.

Having had the immense privilege of being at both Australia’s massive victory over Wales and then in the Millennium Stadium for Ireland’s win over France, a thought has crossed my mind.

The post-match conference in Twickenham struck a major chord. Yes, the Wallaby coach Michael Cheika was full of praise for his side but their captain Stephen Moore articulated a ruthless professionalism.

That his side, down to 13 for seven minutes, kept a fully loaded Wales out by “doing their job” was his description.

Ireland had the numbers but were digging deep into the bench for new ‘legends’ to arrive and each one of them when the pressure was at its most “did their job”. Fantastic! And best rendition of Ireland Call ever.