John Barclay and Blair Cowan miss out on Scotland squad 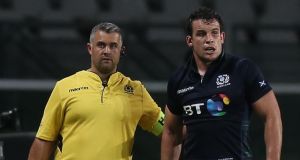 Vern Cotter has confirmed neither Blair Cowan or John Barclay will live out their World Cup dream after controversially axing both from his 31-man squad.

Cowan’s omission in particular is a major surprise after the New Zealand-born London Irish flanker started all five of the Scot’s matches in this year’s Six Nations.

Fellow backrow Barclay ended a near-two year exile from the squad when he was recalled for the warm-up clashes with Ireland and Italy.

But despite scoring in Saturday’s 48-7 romp at Murrayfield over the Azzurri, the on-form Scarlets number seven has also been left out of Cotter’s travelling party.

Gloucester scrumhalf Greig Laidlaw will continue to skipper the side.

To add further controversy to that decision, the man benefiting from Cotter’s decision was John Hardie – who only arrived in Scotland five weeks ago from New Zealand and has played just 57 minutes of international rugby after making his debut in Turin last week.

Josh Strauss is also included, despite the fact the Glasgow number eight – born in South Africa – only qualifies for Scotland through residency rules five days before his adopted nation’s first match against Japan in Gloucester on September 23rd.

Glasgow lock Rob Harley also misses out, with his place taken by Warriors team-mate Tim Swinson, despite missing the warm-up series through injury.

Sean Maitland and Ryan Grant have shaken off injury troubles to claim their places but the Scots continue to sweat on the fitness of Alex Dunbar as he fights to recover from a knee ligament tear. He has not been named in the initial squad but could yet be called up if he can prove his cruciate has returned to full strength and someone else drops out.

Scotland, who have one final run out against France this Saturday, will also take on the United States, South Africa and Samoa as they bid to escape Pool B and make the quarter-finals.

“There’s a good balance of strength, power and experience in this squad. The boys have worked hard to get there and I know they can’t wait to get started.

“We’ve had a tough few months together but we knew right from start that it was 46 to be cut to 31 and it wasn’t easy.

“But [the players left out] have helped this group move forward and they will always be a part of it.”