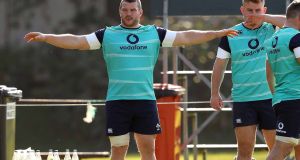 Jack McGrath was 19 when the Lions headed to South Africa in 2009. Photograph: Inpho/Billy Stickland

In light of Rob Kearney and Luke Fitzgerald being amongst the latest withdrawals last week, there are only two Irish survivors from the Irish contingent on the Lions tour here in 2009, which originally was meant to have numbered 14, namely: Jamie Heaslip and Keith Earls.

As events transpired, Jerry Flannery, Alan Quinlan and Tomás O’Leary never made the plane, while Stephen Ferris and, of course, Brian O’Driscoll were casualties on tour, and John Hayes and Gordon D’Arcy were called up.

Jack McGrath was a 19-year-old onlooker from home that summer, yet to make his debut from Leinster until the following season. He can remember watching the Tests in awe.

“A lot of boys saw when South Africa played the Lions back in 2009 and how intense it was,” says McGrath. “I remember watching and thinking I’ve never experienced – even watching on the TV – anything like it. I always thought I’d love to be able to play over here and luckily I have an opportunity to do so.”

“We played different kinds of provincial and development teams and it was a great experience. I was just looking back. I looked at a picture before we left of the guys that were on the tour and it’s just funny how many guys aren’t playing anymore. Probably 60 per cent of the guys aren’t around anymore and they were the best of the best of the schools game.

“Guys still playing would be Noel Reid, Dominic Ryan, Darren Hudson, who was a guy I went to school with. That’s to name but a few that are still playing, there’s others that aren’t. Professional rugby isn’t suited to everyone but the guys that aren’t playing are enjoying themselves and that was a great trip.”

Indeed, in addition to McGrath and those he mentioned, others from that tour who have gone on to play professionally include the Connacht trio of John Cooney, Ben Marshall and Dave McSharry, and the Leinster pair of Marty Moore and Tom Sexton, who is now with the Western Force.

The one probable constant, in a team that is likely to see changes in virtually every other sector, is the now well-established frontrow of McGrath, Rory Best and Mike Ross.

“For us, experience is a big thing. It’s not as if we’re being thrown in to the deep end. There’s still experienced guys here. We may have lost some but we’ve gained guys who are coming in and have won trophies and are flying high.

“You want to be putting your best players on the pitch and guys who are really confident at the moment. It’s going to be great to have them.”

Seán Cronin actually started between McGrath and Ross when Ireland last played, and beat, the Springboks at the Aviva Stadium 29-15 in November 2014, in what was Ireland’s fourth win over South Africa in the six Dublin meetings since they last toured here a dozen years ago. However, as McGrath is quick to acknowledge, it’s one thing playing the Boks in Dublin, and another in their own lair.

“It’s different gravy playing them in their home spot, so for us as a pack we really have to step up because they take pride in their forward battles, especially their scrum.

“It’s an area we need to be really clued in because I think if we give them an inch they’re going to take a mile and that’s what gets their crowd into the game. If they’re dominating their scrum it starts from there so we need to be aware of that.”

Jannie Du Plessis was McGrath’s direct opponent that day, whereas it’s likely to be Frans Malherbe on Saturday. “There’s a few guys gone but they still haven’t got a weak spot. Their depth is huge in the spine of the team and the quality that’s there.

“They just got to the semi-final of a World Cup. They’re third in the world and they’ve plenty of quality there, so I don’t think missing a couple of guys, the amount of guys playing over here, the quality, it’s not going to affect them.”