Naoupu, Miller and Tyrrell will play Sevens rather than for Ireland against France 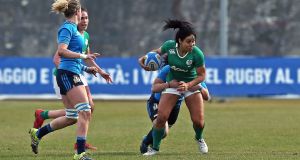 Ireland’s Sene Naoupu will be unavailable for Ireland women when they take on France due to Sevens commitments. Photograph: Giuseppe Fama/Inpho

Anthony Eddy, the IRFU director of women’s and Sevens rugby, has defended the decision to pull Sene Naoupu, Ali Miller and Hannah Tyrrell from the Six Nations match against France this Sunday in Donnybrook (kick-off 12.45pm).

Despite the trio being key figures in Ireland’s backline, they have been redirected to the Sevens squad for a flight to Las Vegas, that same day, for the latest leg of the World Series, which takes place on March 1st and 2nd.

France are in Ireland’s Pool at the World Cup next August, which will be held in Dublin and Belfast, but the decision to withdraw the players is part of an overall strategic plan.

Ireland’s 15 aside women’s coach Tom Tierney is in full agreement.

“Tom and I work closely together every day and work through the selections together,” Eddy explained. “This was part of the high performance plan made several months ago and he was well aware of it, he is fine with it and fully understands it.”

Eddy stated that all three players would be available for the Wales and England games.

Privately, several members of Tierney’s squad are livid about the loss of such important players without advance notice. They only learned about it last Wednesday (February 15th). However, Eddy stated that the “three girls knew about” their withdrawal “for ages.”

“If that’s the case that’s pretty disappointing,” said Eddy about potential discontent in the Ireland squad due to this decision.

“Because the fact is the resources that have been put behind the women’s programme over the last number of years have been pretty good.

They are in a high performance programme now and you would expect a high level of professionalism from those players.”

The 15 aside squad are completely amateur and there are currently no plans to turn professional like world champions England.

The reasoning for Naoupu, Miller and Tyrrell being pulled at such a crucial juncture in the Six Nations is that Ireland are chasing a top eight finish in the World Series, in order to retain their place and qualify for the Sevens World Cup. Currently, Ireland are ranked ninth.

All three players are centrally contracted to the Sevens programme which is supplemented by government funding.

“This was always the plan,” said Eddy. “We knew that there would be difficulty during this time to manage the squad.

“We looked at what was best around development opportunities as well as having some success.”

“Development opportunities” - 32 new players have been capped in the 16 Test matches since Ireland reached the World Cup semi-final in 2014 - is the same mantra used by Tierney following defeats to England, Canada and New Zealand in November.

“I would like to think they will be the best prepared Ireland team going into a World Cup,” said Eddy.

In 2014 Fiona Coghlan and other members of the Ireland squad met with the IRFU to insist that 15 aside preparations were prioritised ahead of that year’s tournament. The union agreed and Ireland subsequently finished fourth.

Eddy was asked whether growing concern around the 15 aside squad, who have performed significantly below the standards of a country with aspirations of competing in the latter stages of the World Cup, despite bonus point victories over Scotland and Italy this year, is due to the lack of continuity in selection.

“By no means are we disrespecting [The Six Nations] but what we are trying to do is provide other girls opportunity to compete around positions.

“We got to go into the World Cup with 28 capable players. We absolutely used November for that opportunity and we are still doing that because they are not playing in a professional league so Test rugby is it for them.

“Sevens isn’t the priority,” Eddy stressed. “The women’s programme - and the 15 aside women are part of the high performance now - is the priority.”

Eddy does not envisage any more disruption to the 15 aside squad, or loss of players in the build up to the World Cup despite further Sevens tournaments in Japan, Canada and France in April, May and June.

“I would like people to look at why these decisions have been made with a level head,” he added.

Yan Bingtao becomes youngest Masters champion in 26 years 07:01
Liverpool’s attack struggling without Van Dijk; Yan Bingtao wins Masters title 06:51
‘I realised the book had helped people and that has been part of the healing’ 06:15
Ken Early: Liverpool have crumbled without Virgil van Dijk 06:00
To let the Games begin, or not: Three Irish athletes give their thoughts on the Tokyo Olympics 06:00
Crossword Get access to over 6,000 interactive crosswords