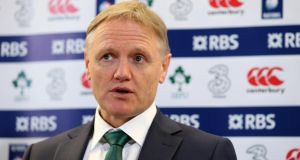 It was all we’ve come to expect from modern-day Test rugby, brutally physical, suffocatingly tight, as taut as a wire and absorbing until the very final play. Whether it was quite so compelling on a screen is another matter, but it sure led to a crescendo of noise in the Aviva.

At the end, Ireland were still standing, which was almost as much of an achievement as a second successive win in this year’s Six Nations given how the French threw the kitchen sink at them in the last quarter. For an hour or more Ireland had been the more composed, assured and controlled side, with Johnny Sexton orchestrating matters with his full repertoire of kicks. It helped that France, in their determination to beat Ireland up physically, were often ill-disciplined.

Admittedly, Ireland struggled to break down the imposing French defence, which lived on the edge in the way it pushed up, hit hard and swarmed the breakdown. Irish support players had to be sharp and accurate in their clear-outs. If the first man in didn’t effect a clear-out, very often it led to turnovers or penalties. They adapted by having to commit more to the breakdown, which in turn left them short of numbers and attacking narrowly.

The setpieces were again excellent, with Mike Ross once more vindicating his selection with a high work-rate, including a tackle on Teddy Thomas that may have been the finest of his career. As usual, Paul O’Connell completed an inspiring mountain of work, while Sean O’Brien and Jamie Heaslip – until Pascal Papé kneed him in the back – added real ballast in the collisions and breakdown.

Indeed, in many ways, it was a very Joe Schmidt Irish performance. There were times when it almost felt like you were watching passages of play choreographed in his mind. An example was a lineout on the right-hand touchline: the ball was moved across to Simon Zebo on the left and recycled to go back against the grain, with Jared Payne feeding Murray as first receiver and Sexton sweeping in behind and then, having lured the inexperienced Thomas up on the outside, easily locating the vast space with a long diagonal touchfinder. Like so much else, it was straight off the training ground.

Ireland opted not to box kick immediately out of defence as an exit strategy, but rather to recycle the ball infield, once luring the French to push up too soon and be caught offside – something Schmidt assuredly mentioned to Wayne Barnes in their pre-match meeting.

Similarly, when Ireland stood off a telegraphed French maul in the first-half for Rory Best to come around the side, and the visitors transferred the ball from the carrier to the back of the drive, that amounted to obstruction. Again Barnes had surely been forewarned of this tactic and the disgruntled visiting supporters, much like their team, appeared not to know the rules judging by their howls.

Not surprisingly, Ireland profited in the aerial duels, where both Kearney and Tommy Bowe excelled. In this regard, Sexton’s couple of hanging reverse restarts in response to the two Camille Lopez first-half penalties also yielded a dividend; Bowe palming one down to Payne, then tackling the isolated Damien Chouly into touch for an attacking Irish lineout.

Each, indirectly, led to ensuing Sexton three-pointers. In a typically tight modern-day Test match of narrow margins, such little details are huge.

Helped by this attention to detail and assuredness, Ireland had inched 15-6 ahead when Papé kneed Heaslip in the back – a cheap shot that might have merited red after Barnes had wisely resorted to the TMO.

They went for the jugular with a driving maul, Murray running infield and using a decoy runner for Ireland to accentuate their numerical advantage out wide. Sexton straightened through and the pass that caught Payne in the head was assuredly a long skip pass intended for Zebo, which would have given the winger a walk-in. And that would have been game over.

Instead, the pendulum swung when Best was binned for tripping Thierry Dusautoir, after the French had unloaded their almost freakishly powerful array of gargantuan straight runners – Uini Atonio, Vincent Debaty and Romain Taofifénua (combined weight 401kg), in tandem with the battering Mathieu Bastareaud (126kg).

Schmidt was “incredibly proud of the defensive display that we fought our corner really, particularly when we were a man down in that last quarter. They have some of the biggest humans I have ever seen on a rugby pitch coming at us and it is very, very difficult to arrest their momentum once it begins.”

Yet typifying French rugby nowadays, Les Bleus seemed obsessed with just battering straight through rather than using footwork or variation, although their big rumblers did start unloading in the tackle – notably Atonio, the Kiwi of Samoan extraction. Eventually, this created the numbers against 14-man opponents for Debaty to put Taofifénua over. As with a previous penalty, Ireland were grateful for another bad miss by Lopez.

By contrast, Sexton landed five from five to go with Ian Madigan’s one successful penalty, and this helped to ensure the margin stayed at seven points rather than be reduced to five or even two. The margins were, as ever, tight alright.

Indeed, Sexton was backing up a 12 from 13 return in the November wins over South Africa and Australia, while Ian Keatley was six from six a week ago in Rome. That means in four of Ireland’s last five Tests, excluding the Georgia game, their place-kicking return has been 24 from 25.

Each half, fittingly, ended with Zebo – an enthusiastic convert to the kind of workaholic player Joe Schmidt demands of his wingers – making what amounted to a turnover tackle, forcing a spillage by Scott Spedding at the end of the first, and then tackling Rémi Lamerat over the touchline with the help of a green horde to end the match.