Ireland left all black and blue after a brutally intense game 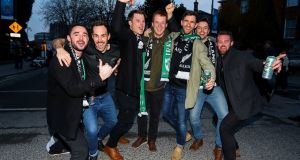 New Zealand fans ahead of the game. Photograph: James Crombie/Inpho

Ireland were left All-Black and blue after a brutally intense game at Lansdowne Road, in which New Zealand avenged their historic defeat in Chicago and restored the traditional order.

But if the home team surrendered their 14-day winning streak against the sport’s greatest team, they lost no respect in defeat.  This was not officially a series, and aggregate scores didn’t count.  Even so, the combined result was 50-49 to the All Blacks, a fair reflection of two epic contests.

Outside a nearby pub beforehand, a dozen Aucklanders in fancy dress - their special effects trousers made them look like they were being carried on the shoulders of leprechauns - expressed the general confidence among the visitors that the Chicago result was an aberration about to be corrected.

On a scale of “one to 11”, how sure were they of victory?  ”Twelve”, agreed Andrew Younge and Matt Rollason.  They were right about the result, and inadvertently predicted the winning margin.  But their team needed all its brilliance, some luck, and a large reserve of cynicism to close out the result.

Despite racing into a 14-3 lead in the opening quarter, the All Blacks went on to rack up a similar scoreline in penalties conceded throughout the game, a fact reflected in two well-deserved yellow cards.

They also needed some friendly refereeing, first when Beauden Barrett’s 14th minute try seemed to have been sabotaged by Johnny Sexton - only the television match official thought otherwise - and later when the pass for the game-sealing third try looked at least suspect, but the TMO’s opinion was not sought.

In the meantime, Joe Schmidt’s team had lost one third of its starting line-up to injury long before half time.  Sexton, Stander, and Henshaw all departed amidst the general attrition: their absent initials - SSH - seeming to silence the crowd.

Zebo joined them too, eventually.  But despite the carnage, Ireland somehow battled back into the game, with Jamie Heaslip, Sean O’Brien, and substitute Josh Van Der Flier all heroic.  The All Blacks were made to sweat for the win.  But in the end, their defending - with 14 men as well as 15 - was just too good.  Where Ireland managed five tries in Chicago, they failed to score one here.

So ended the two weeks that shook the rugby world.  Earlier in the day, an Irishman had added to the sense of a hemispherical power shift: Conor O’Shea’s Italy beating South Africa for the first time.

But the revolution remains a work in progress.  By Saturday night, the All Blacks had extended their unbeaten record in Dublin, which still lasts 111 years.