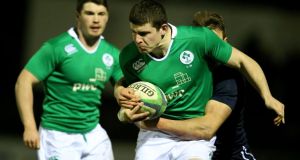 Ireland’s Nick Timoney is tackled by Patrick Kelly of Scotland during their Under-20 Six Nations Championship match at Netherdale, Galashiels, Scotland. Photograph: Inpho

Ireland under-20s made history but in the wrong way after recording a third successive defeat in the with a loss to Scotland in the final round at Netherdale last night .

The Irish side were unable to match the forward power of the Scots who repeatedly won the scrummaging contest and who were adept at the driving lineout. Behind the scrum Ireland looked much the better of the two back divisions but even so they were unable to break down a determined Scotland defence

Ireland put themselves under pressure straight from the kick-off after Nick McCarthy knocked on deep in side the Irish 22 metre area. Scotland took advantage first by attacking off the ensuing scrum and then driving a penalty lineout giving skipper Magnus Bradbury the opening try, converted by scrum half George Horne.

The Irish threatened when winger Stephen Fitzgerald cut through in midfield but a brave tackle by Rory Hutchinson stopped the move. There was further disappointment for Ireland when Ross Byrne failed with a 40 metre penalty attempt but not for Scotland as a second driven lineout produced a try for lock Lewis Carmichael.

If Ireland’s talents had been suppressed by Scotland’s aggressive defence and forward power then perceptions changed with a fine score by Stephen Fitzgerald, the left wing finishing off clever handling from the Irish backs with Byrne, centre Gary Ringrose and right wing Ciarán Gaffney key players in the move.

Byrne’s conversion adding to an earlier penalty brought Ireland to within two points of the Scotland scores but the men in green were unable to make any further dents in the first half leaving the Scots ahead at half time by 12-10.

Ireland looked much more purposeful in the second half but against a Scotland forward pack that always caused problems for the Irish eight they failed to add to their points tally, the nearest the came to a try being a short range effort by centre Sam Arnold.