Gerry Thornley and Liam toland give their reaction to Ireland's 49-7 win over Georgia. Video: Daniel O'Connor 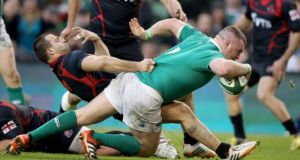 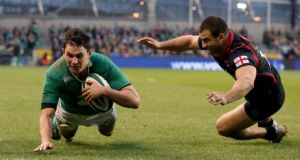 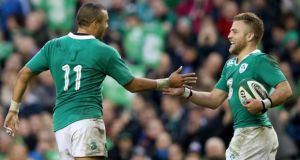 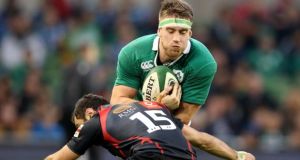 This was always the worry. Even the All Blacks, having been completely redesigned for yesterday’s narrow escape in Murrayfield, looked exactly what they were – a team playing with each other for the first and probably last time.

At least victory was never in doubt here.

The Georgians didn’t disappoint in one area. Kubriashvili incensed Richardt Strauss when his hand drifted into his face while Viktor Kolelishvili’s boot caught the eye of Dominic Ryan, ages after the whistle had sounded.

Eoin Reddan complained to JP Doyle but the referee took no action.

Ryan had a fine opening half, as did Tommy O’Donnell, but Darren Cave made a rash of errors. His fellow backs were also guilty of not securing quick ruck ball, leaving Robbie Diack and others exposed on the floor.

Kilcoyne burst through the defensive line on 15 minutes with Ryan flinging a fine left-handed pass that eventually allowed Madigan to open Ireland’s account.

Madigan was next to race into open country before linking with Cave who threw a terrible pass to Craig Gilroy. The winger knocked on.

Ireland went to their maul in search of a score. It wasn’t for a lack of endeavour but some great, and illegal, counter rucking by Sale hooker Shalva Mamukashvili, along with O’Donnell’s fumble as he powered over the line meant Ireland went in at half-time just 9-0 ahead.

That coincided with Georgia scrumhalf Giorgi Begadze being yellow carded. They had been warned.

The damn eventually broke two minutes into the second half when Kilcoyne crashed over for the first try.

That allowed the Ireland management roll out what seemed the pre-arranged plan of hauling off Ross, with an eye to Australia in six days’ time.

Simon Easterby may be the forwards coach nowadays but the residue of John Plumtree’s one season drilling the Irish maul is clear to see.

The next try, on 50 minutes, was finished by Strauss falling over the line.

They did run in a good try. Begadze got a yard outside Dave Foley and freed his hands, despite Ryan’s hit, to put Giorgi Nemsadze in space. Reddan’s attempted tackle was swatted away by the big lock.

Georgia came to survive, hence the constant spoiling, but there was a tinge of sympathy when number eight Dimitri Basilaia was sin-binned on the hour mark for kicking the ball out of a ruck. Jamie Heaslip did something similar against South Africa, yet no sanction followed.

Moments later Cave, then Madigan, shipped play out to Simon Zebo’s wing. Madigan’s conversion made it 30-7. It also prompted Joe Schmidt to make Robin Copeland the 13th man capped during his reign.

Stuart Olding, Devin Toner and Sean Cronin also arrived with Zebo’s withdrawal indicating he will retain the 11 jersey for the Wallabies next Saturday.

D’Arcy is perhaps ready to return, with Ian Keatley finishing today’s match at inside centre.

The contest was over, not just because of Ireland’s dominance but Georgia were reduced to 13 players by Lasha Malaguradze’s injury.

Two tries followed from the impressive Felix Jones and another by Olding as the bookmaker’s 41-point handicap was hauled in by Madigan’s kicking clinic. Still, Foley got the nod for man of the match.

“That won’t be good enough for Australia next week,” said the Munster secondrow.