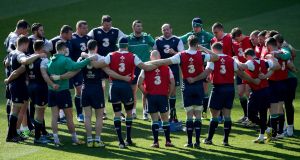 It’s been feisty, it’s been mouthy, there’s been plenty of gamesmanship, much of it good-humoured before bordering on unsavoury, and it hasn’t even kicked off yet. It’s been a long two weeks, all right, and as if there hasn’t been enough history between Ireland and England.

Amid all the barrage of barbs coming from Eddie Jones, Ireland have kept their verbal powder dry. While the rest of us become ensnared and enlivened by it all, Rory Best yesterday made a fairly compelling case when disputing there was any need for posting articles on the walls of the Irish team room.

“We’ve enough to do with making sure that, from a rugby point of view, we get our stuff right. If you need any extra motivation other than playing for your country at Twickenham, for me you’re in the wrong changing-room anyway.”

Indeed. As Jamie Heaslip said during the week, this is England and Ireland, at Twickenham. Best even played down Dylan Hartley’s spat with him in the Northampton-Ulster game in December 2012, when the English captain’s flurry of punches and elbows added a two-week ban to his extensive rap sheet. Best maintained, perhaps uniquely and with a straight face, that he even felt “a wee bit sorry for Hartley” at the Six Nations when persistently questioned about his disciplinary record rather than the “fantastic” playing attributes which compelled Jones to make him captain.

In any event, this looks like Ireland’s toughest game of this Six Nations – winless away to a more settled side with two wins from two.

Ireland’s sole try in last season’s 19-9 win at the Aviva, England’s sole defeat in their last 11 Championship matches, was due to Robbie Henshaw’s brilliance in the air and the execution of Conor Murray’s box kick into the corner with a free play. With Ireland’s GAA roots, aerial skills and array of full-backs (reduced considerably today) it would be foolhardy not to utilise these skills.

And, lest we forget, for all Eddie Jones’s initially cheeky pre-match gamesmanship, England themselves have kicked more than Ireland in two games to date. Furthermore, in addition to Mike Brown and Jack Rowell negating Ireland’s kick-chase game at Twickenham last September, Anthony Watson beat Simon Zebo in the air to George Ford’s cross-kick (again a free play) which helped England into a 12-3 lead.

The aerial duel could again go a long way toward deciding the outcome, either way, as could other things, such as one side dominating the set-piece, winning the collisions or breakdown, or simply having the better running game.

In most of these areas, England look the likelier. They have done a number on the Irish squad before, most notably here in the scrum carnage of four years ago. And the problems had started before Tom Court replaced Mike Ross.

Hence, if Ireland emerge equitably from the set-piece duel it would be a result – especially as the selection of Josh van der Flier supplements the poaching and breakdown work of CJ Stander and Jamie Heaslip. Admittedly, England also have Dan Cole, while in addition to his carrying Billy Vunipola is probably a more effective poacher than either of his flankers.

Ireland look a tad unproven in certain areas but new caps such as Van der Flier, Stuart McCloskey and Ultan Dillane can galvanise a squad. Best doesn’t dole out compliments easily but he knows a good player when he sees one and had no qualms about putting Ireland’s new openside in that category.

“To play against Josh is a real handful, he is very combative, carrying the ball but also in the tackle. You can tell with these players, when Conor Murray first came into the Ireland squad you could just tell there was something about him, and it’s the same with Josh. There’s just something about him that you know he is going to be a quality player.”

All in all, it looks a tall order. And then there’s Romain Poite.

“I think it would be huge,” ventured Schmidt at the prospect of an Irish win. “We are really excited about even going and there would be a touch of euphoria if we managed to get the result.” It would be some achievement all right, arguably the best one-off win of the last three campaigns under Schmidt’s watch.