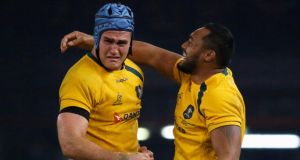 The Australian rugby community likened it to their Justin Harrison moment, when on his debut in the third Test a dozen years ago Harrison had the temerity to snaffle a close-range line-out from the one eyebrow ogre that is Martin Johnson.

Liam Gill, with a little help from Ben Mowen, repeated the trick when the Lions were poised for a match-winning score in the Etihad Stadium on Saturday night, but it was the call to eschew a three-pointer minutes before and take an attacking scrum which is rightly being hailed as a potentially defining moment in the series.

For that James Horwill is being hailed, although clearly it was in consultation with Will Genia, who is the George Gregan-like brains in the Wallabies trust.

In any event, the series decider could hinge on the outcome of today’s IRB appeal into last week’s judicial hearing which cleared Horwill of any foul play when seeming to stamp on Alun Wyn Jones. More than ever, Horwill has become to the Wallabies what Paul O’Connell had been to the Lions.

“He’s a great man, a great leader,” said Kurtley Beale at an early morning press conference after the Wallabies victory the night before.

Leads by example
“He leads by example in all facets of the game. He had his own distraction in the week and the way he played was outstanding. Full credit to him for bouncing back and for continuing on with his role within the team. He’s very inspirational and can say the right words at the right time to really get the boys up for the occasion. He’s a great man and a great leader within the group and he’s really well respected.”

Beale also confirmed the impression, ala Speargate in 2005, that the IRB’s appeal had contrived to unify the Wallabies squad, adding: “He was always on his role within the team and did his job very well. I guess that’s what opened it up for Ashley-Cooper’s try out wide. Without the piggies (the forwards) running those nice tight lines and making the yardage up front it would have been impossible for James (O’Connor) and Coops (Adam Ashley-Cooper) to do their job.”

Pending Horwill’s hearing, Robbie Deans said: “When I started my career as a coach, I didn’t realise I was going to need a legal background as well but I’ve done an awful lot of it! It’s not something that excites you greatly but it is part of the game, and it’s an important part of the game. We’ve got a responsibility to the game itself and to the viewing public. It will run its course and then we’ll get on with the stuff that really excites these blokes.”

The Wallabies had played a riskier, ball-in-hand, counter-attacking, high-tempo game, to which Deans smiled and said: “”Well, you’ve got to push the envelope in order to win. We’ll never beat a side as able and experienced as this Lions side without chancing our arm. So those are the decisions that the players make in the moment. There’s a tipping point as well. While we make errors early we also ask a lot early and some of those demands are the point of difference at the far end.”

“Who knows what it is that just opens up that half gap, so you’ve got to keep asking, keep probing, you’ve got to ask yourself first and hopefully, as we did in the last few minutes, build some momentum and keep the ball long enough to actually exploit what’s there. We got to that point on a couple of occasions but released the pressure ourselves, prior to that. When it came down to it and we had to, we got it done.”

“We’ve got a number of blokes who’ve played across the backline. James has played everywhere essentially from 10 to 15 as has Kurtley, his first Test was on the wing, and Christian, likewise has played 10 to 15.”

“That was the first occasion they all played together, because Christian can’t remember his first outing and that doesn’t count. There’s going to be some teething problems but they worked their way through it last night and they looked much better right at the end when there was a need. Every experience they get in training followed by a game is going to contribute to their growth and that’s what we’re witnessing.” Asked if this was a mix he’ll stick with, Deans smiled again and simply said “Yes.”

The debate will rage as to whether James O’Connor can be a Test outhalf, but he remains typically blasé about it all. “There has been a lot raised about the position of myself but my mindset throughout is that it doesn’t matter, especially in this team, what number you have on your back. There’s a lot of ball players, a lot of guys playing all over the field. As you saw last night, I ran some lines out wide and it’s just wherever you find yourself. You take ownership of that position on the field. You’ll have seen Kurtley standing at 10 a few times and that’s the way we play the game, whoever’s closest to the ball takes it on.”

‘Won’t happen again’
At the beginning of the press conference, O’Connor read out a statement regarding his 4am visit to Hungry Jack’s with partner in crime Beale, saying: “We’ve spoken to Robbie and to the team and, although we didn’t break team protocol, it was a lack of judgment on our behalf. It’s not ideal preparation during a Test week and it won’t happen again. We’ll be better for it. As far as we’re concerned it’s a closed issue now.”

But for all the analysis, all the what-might-have-beens, no-one was more searingly honest than O’Connor’s counterpart Jonny Sexton. “It’s a tough one to take but if we’re honest with ourselves then we have to say we didn’t play well enough.”

And that it was.