Scrum coach: ‘We just have to adapt to what has been refereed over the last few weeks’ 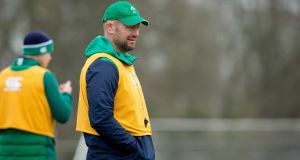 It’s a dog-eared discussion. When Italy are the opponents the focal points are usually the physicality they bring to any contest and their prowess in the scrum and maul.

Based on their performances in this season’s Six Nations it’s a little unfair as the Italians have played some decent rugby and their coach Jacques Brunel has spent his tenure in charge trying to make them a more rounded team.

The issue of the scrum though is relevant. Both France and England managed to get some currency in this facet of play and were rewarded on the scoreboard. There’s no point in disputing the legality of what they did or otherwise because the respective referees in those matches took no issue.

Striking a balance between what referees say they want and what they are willing to permit on a given day can be a fraught exercise. Ireland’s scrum coach Greg Feek admitted an element of frustration in some interpretation.

“The corrective work is more changing things than anything else. It’s hard especially for the players to be so disciplined and for us to drive that but to go away from being like that is harder to do sometimes. We just have to adapt to what has been refereed over the last few weeks.

“We’re trying to do things, and have always tried to do things as best we can to what has been asked of everybody, and that is sometimes hard to coach too. I feel for the guys because you sometimes have to say, ‘you haven’t done much wrong here.

“We’re not going to reinvent the wheel but we certainly had a good chat about how things are being done [REFFED]and how we look. We’ve a referee coming in this weekend from the Super Rugby so we might have a different view on how he sees things. We have to make sure we adapt to that.”

Martin Castrogiovanni’s absence through suspension is a loss for Saturday’s visitors to the Aviva stadium but the tighthead is not the player he was. Feek admitted: “He hasn’t been starting but he is a big figurehead behind the scenes and coming off the bench, in their training, travel and talking to (his teammates).

“Dario Chistolini came in around the World Cup so they have reasonable depth there, and he scrums pretty well. Around the field, that is where they will probably miss him (Castrogiovanni) a bit.”

Feek also picks up on the theme that Italy are a more rounded side without compromising their more traditional virtues. “They’ve got a really good, expansive game. They can keep it tight and have good continuity through building phases.

“Defensively, if you get close and high, they are very strong men and you’d be lucky to get the ball out if you are not technically correct; if you are not going in with vigour or the support with two or three guys around the ball carrier. We need to get those exchanges precise, first and foremost, and, obviously, the set piece.

“That feeling of winning is a want, almost a need now but it’s something we haven’t forgotten. We certainly know how to win and it’s about making sure we keep living in those moments clinically, and cutting down times when we turn over the ball. I think we’re in a good, place; not far away.”