Gerry Thornley: Suddenly, time is running out for Lions 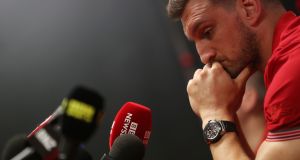 British and Irish Lions captain Sam Warburton who on Tuesday will play only his second game since early April. Photograph: David Davies/PA Wire

The previously much-derided and pilloried Lions tourists of 2017 travelled south to Dunedin on Sunday for Tuesday’s latest rendezvous with an in-form Super Rugby franchise, the Highlanders.

They did so with a spectacular view of the southern Alps, a new-found swagger in their step and even heightened respect from the New Zealand media, before unveiling another completely revamped starting XV for the third game running.

Saturday’s 12-3 win over the hitherto unbeaten Super Rugby pacesetters, the Crusaders, in Christchurch, was a remarkable coaching and playing achievement in many respects, given it was a newly formed team against one that had been together for seven months and, by rights, has to be considered the best non-test team in the world. Now the bar has been raised within the squad as well.

Fears over the well-being of their captain Sam Warburton have been allayed by his recall to lead at the side at Forsyth Barr Stadium on Tuesday (kick-off 7.35pm local time, 8.35am Irish time).

Interestingly, Jared Payne is picked at fullback, a position which still seems very much up for grabs come the first test, particularly as Warren Gatland has revealed that the jaw injury Stuart Hogg suffered following an accidental collision with Conor Murray requires that he sees a specialist.

Robbie Henshaw also makes his second tour start, the ante having been upped by another strong carrying display by Ben Te’o in Christchurch and the way the Johnny Sexton-Owen Farrell partnership worked for the last 50 minutes. Rory Best, Iain Henderson and CJ Stander all start in the pack.

Suddenly time is running out. There are only three games between now and the All Blacks in a fortnight’s time, and realistically only Tuesday’s game and Saturday’s meeting with the New Zealand Maori in Rotarua before Gatland and co ringfence that first test match-day 23.

Asked specifically about the pressure now on Henshaw, Gatland said: “I think they are all big games for everyone now. We knew the first couple of games we felt we were improving, a big step up in performance particularly defensively against the Crusaders. We’re well aware of the confidence and continuity created from the Crusaders win, and we want to keep doing that. We want to perform collectively as a team again. Their challenge is to put us under pressure in terms of selection.”

The pressure now even extends to Sam Warburton, who on Tuesday will play only his second game since early April. That said, he was typically phlegmatic about his current situation.

“I know there’s every chance that I might not even get involved in that first. I see it as I’m tour captain, and if I’ve made the Test then that would be a bonus for me, but I’ve said there’s three Tests to get selected for so it’s not the be all and end all with the first one. I’ll be honest with Gats and Gats will be honest with me. If I play Tuesday and I still feel I’m a bit undercut, then I might not be ready for that first Test. Or maybe I could have a blinder on Tuesday and feel absolutely fine.”

Three of the five Highlanders players in the All Blacks squad – Liam Coltman, Lima Sopoaga and Waisake Naholo – have all been made available but hugely influential scrumhalf Aaron Smith and fullback Ben Smith have not, and nor have their Maori contingent of Elliot Dixon, Ash Dixon, Joe Wheeler, Rob Thompson and Tom Franklin, while Liam Squire is still injured.

None of this Tuesday’s Lions encapsulated their current standing better than the ever-honest and engaging Dan Biggar. “Johnny (Sexton) and Owen (Farrell) deserve to be just a fraction ahead at the moment. That is me being brutally honest. But my nature is to not want that to happen; my nature is to close that gap and put some pressure on the two on them.

“That’s the chance I have on Tuesday night, but that’s not my mindset. It’s not going to be ‘I’ve got to do this, this and this to put pressure on Johnny and Owen’. It’s going to be about what I can do for the team and hopefully that comes off. It’s not nice to be probably the third choice at the moment. My personality isn’t happy with that and it’s my job to try and force the order a little.”

And, being a Welsh ‘10’, Biggar has other baggage. Asked if he’d thought about emulating some predecessors as a Welsh-come-Lions outhalf, Biggar said: “Not overly, if I’m being honest. I would much rather be born a second row in Wales sometimes,” he said with a chuckle.

“You have absolute greats like Phil Bennett, Neil Jenkins and Stephen Jones, all those people – but for me it’s about being Dan Biggar rather than trying to think what others have achieved. I want to put my own stamp on the jersey. That doesn’t really get me going, wanting to try and emulate players from the past however great they’ve been, it’s me trying to take little bits and pieces from what they’ve done and put my own stamp on the jersey. I’m trying to enjoy myself out here. It is a once or twice in a lifetime opportunity for some guys and it’s important to enjoy it rather than putting pressure on yourself so that’s the approach I’ve gone with.”

Overall though, the new-found pressure from within seems only to have emboldened these 2017 Lions. “That’s the beauty of Lions tours,” said Warburton. The mood in the camp is noticeably more upbeat.”

As Courtney Lawes also said: “If we can gel the talent we’ve got in this team together, it’s going to be hard to beat us.”