Gerry Thornley: Ireland do not have a bottomless pit of talent

Given the depleted resources he is dealing with, criticism of Schmidt seems a little daft 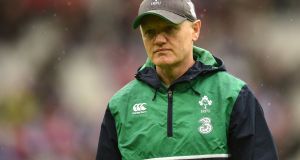 Most coaches are perfectionists, even though they well realise the perfect performance is beyond any team they will ever oversee. More often than not, the result is paramount and placates or compounds the imperfections. But for Joe Schmidt, last Saturday appeared to be acutely frustrating because so much of the imponderables were beyond even his control.

Like Monet, Cezanne, Renoir or others whose works decorate the Louvre and the Musee d’Orsay, Joe Schmidt may have envisaged how his work was intended to pan out, but he was left to rail against the myriad of events which, metaphorically and literally, rained on his canvass at the Stade de France.

First and foremost, there was the cruel itinerary which left him negotiating a six-day turnaround between two inevitable bruisers which included a travel day, and which was always liable to add to a damaging injury toll.

In 14 matches over the last five seasons of the Six Nations where a team has been hit with a six-day turnaround, they have managed five wins and a draw, losing eight. On the six occasions they’ve been away from home with a six-day turnaround, there have been two wins and four defeats. It has to be a factor, and palpably was so last Saturday is exposing the thinness of Ireland’s squad.

Then there was the litany of injuries which left Ireland shorn of a scrum over the course of 80 minutes for the second week running as well as the game-breaking abilities of Keith Earls and Simon Zebo.

Afterwards, Schmidt stopped short of castigating the officials, if only just, primarily for Jaco Peyper’s interpretations at scrum time under both goalposts in the second half; the cheap shots and roughing up of Johnny Sexton especially and with it the non-use of the TMO; his belief that Dave Kearney should have been awarded a first-half try and the laughable decision to merely award a scrum rather than a penalty against Maxime Mermoz for a deliberate knock-on with Ireland’s last shot at working their way downfield.

However, one ventures his frustrations went beyond officiating on the day, for this was an unexceptionable French team. But it’s easy to forget where they were coming from, and they’ve come a long way from a World Cup which ended with perhaps the country’s most embarrassing rugby defeat ever against the All Blacks.

If nothing else, Guy Noves has entrusted players who were effectively blacklisted under the previous regime, and other players with X-factor who can turn a game, and Francois Trinh-Duc will be back before long. France did not have this collection of individual threats in their ranks during the World Cup or even in previous Six Nations campaigns.

He may have got away with risking an inferior scrum for the first 45 minutes, but Noves is building something. No less than his predecessors, his problems with the club game won’t go away. Indeed, France’s summer tour to Argentina clashes with the overlapping French Championship semi-finals and final. In other words, he will be denied players from France’s four best clubs, conceivably Racing Metro, Toulon, Toulouse and Clermont. Only in France.

As for his counterpart Schmidt, in addition to missing three front-line props, a primary ball carrier up front in Henderson, the Irish coach was without Peter O’Mahony, Luke Fitzgerald and Tommy Bowe as well as Earls and Zebo. Are we really to consider this a vintage Irish team?

Viewed in that light, the debate about style or criticisms of Schmidt’s prescriptive attacking game (Ireland made one offload to France’s 17 on Saturday), or blooding young players such as Stuart McCloskey and Garry Ringrose, seem a little daft.

However limited the Top 14, not only are France better equipped for the bludgeoning, straight-running game that helped turn the tide their way in Saturday’s second half, they still have more innate offloaders than come off the provincial conveyor belt.

It’s also now even more questionable as to whether pitching Ringrose into Twickenham would do him or the team any good.

All that being said, even allowing for conditions, the last two games have underlined how much more cutting edge Simon Zebo provided from fullback against Wales (as, of course, did Maxime Medard on Saturday). He is not as strong in the air and tackle area, or as good at covering the back field as Rob Kearney is, but Kearney is not playing with much attacking verve or confidence right now.

As well as Zebo, Ireland have the option of playing Jared Payne in a position where he oozed class as ever on his return to action with Ulster.

Admittedly, this would mean upsetting a maturing midfield pairing in which Schmidt and Co have invested in the Robbie Henshaw-Payne partnership. They had a high work-rate as usual last Saturday, all the more so bearing in mind Payne played with a dead leg for the last half hour. He is the glue that gels it all together in many respects, especially in defence.

Ireland could be adding more to their attacking game from fullback at the moment, but let’s not get carried away; they do not have a bottomless pit of talented options.