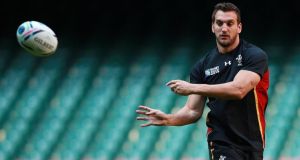 There is a temptation to portray Warren Gatland as the poker-faced gambler, a man who follows a hunch, from his days in charge of Ireland, through his Lions stewardship to his tenure as Wales coach. The New Zealander has never shied away from making a tough selection decision or lacked the courage to back his judgement.

Gatland has shuffled his playing resources for this match, introducing Gareth Anscombe at fullback, shifting Liam Williams across to the left wing and stationing George North alongside Jamie Roberts in the centre. It’s unlikely that his Australian counterpart Michael Cheika will have read Gatland’s intentions.

However, when Cheika assesses the way Wales are setting up to play, he might recognise the shapes; if not a mirror image, Gatland has tweaked his team to compete in the areas the Wallabies have excelled in during the tournament to date. Imitation is the sincerest form of flattery.

The Aussies eviscerated England at the breakdown, winning nine turnovers and although they have lost Michael Hooper to suspension, Cheika has plumped for an identical replacement, style-wise, in 21-year-old Wallaby rookie of the year Sean McMahon.

Cheika explained: “I am sure he will bring a lot of energy to the game. He wouldn’t be playing and I wouldn’t have picked him if I didn’t believe he could play for his country. I think you have got to balance the combinations you are trying to get as a team. Sean has played very well in the tests I have seen him play. He works hard and it’s a good opportunity for me to let him shine on this stage.”

Gatland told Dan Lydiate to stand down and rest his damaged eye socket and instead elected to promote openside Justin Tipuric to the starting team. Captain Sam Warburton moves across to the role of blindside flanker.

Warburton said: “I will still try and play like an openside even though I am playing at six but naturally you might end up making a few more carries and tackles because of where you end up positionally. Whenever I play with Justin [Tipuric] and whenever he comes off the bench it lifts my energy. I feed off that. It’s good for my game.”

Cheika is less reactionary in terms of what way the opposition sets up. What he might have noted though is that Australia concede an average of 10 penalties per match, with seven of those coming inside their own half while Wales concede an average of 11 penalties per match but only four in their half. The Welsh have managed more turnovers (32) than the Aussies (23) but whatever the statistical analysis there is little to choose between the sides.

The Wallabies have won the last 10 meetings between the sides; the most recent five games have been decided by five points or less.

1 Gordon D’Arcy: Change has to happen before Ireland's trip to Paris
2 Ouf of Bounds: Patrick Reed helping make the ‘C’ word less taboo
3 Kevin Seaward: ‘The first time I wore the Vaporflys, I hated them’
4 Cheltenham keeping a watching brief on coronavirus
5 IRFU not consulted prior to Minister Harris’ recommendation to cancel Ireland v Italy
Real news has value SUBSCRIBE