‘That was the story of the day, we didn’t back up the pressure we put them under . . . we didn’t execute out there’ 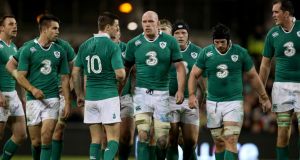 Ireland’s captain Paul O’Connell talks to his players during the 18-11 win over France at the Aviva Stadium. Photograph: Dan Sheridan / Inpho

A Valentine’s Day game for the romantics it certainly was not but for all the talk of brawn beating brains in the modern game the result still shouts loudest and a seven-point win over Six Nations rivals France was about as good as Ireland could have hoped for at 5pm this afternoon.

Paul O’Connell insisted he was “delighted” with the result but his face told a different story, knowing as he did that there is plenty to work on after a game that saw Ireland fail to make a line-break and fall short of France on every major stat bar the most important one - they lost on territory, possession, ball carries and metres made.

“Frustrating,” was the captain’s response when asked what the game was like to play in. “There were times when we put them under presure and we didn’t follwo up on that pressure. We released it, there was one stage where we had a really good maul, we drove them really well, the boys picked a good time to take it out of the maul and almost scored and we knocked it on.

“That was the story of the day, we didn’t back up the pressure we put them under, we didn’t release it and they were able to do the same to us, and put us under pressure. There were a lot of things in the game that frustrated me in terms of things we want to do well, things we have done well all week that we didn’t execute out there.

“From my point of view, it’s not that often that I beat France or am on teams that beat France, so you can’t complain much when you are on the right side of the result against them.”

The defence was tested to the limit in the closing quarter, thanks in part to the absence of the experience and nous of Jamie Heaslip after Pascal Papé’s seemingly deliberate knee to the number eight’s back, and also to the arrival of replacement France scrumhalf Morgan Parra.

Papé walked for 10 but his replacement after time was up was Romain Taofifenua, who crossed in the 68th minute to close the gap to seven, and prompted the period that must have skewed the stats in France’s favour. O’Connell admitted it would have been nice to finish the game in France’s half but said the defence in those closing stages was arguably better than it was in the corresponding fixture last year and in defeat to New Zealand in November 2013.

“We’d love to be defending with the ball, having the ball and going at them. I think when you give teams with the quality of France . . . inevitably something happens, and unfortunately we conceded one try and I think it was better than that game last year and in the New Zealand game, and probably the South Africa game, but it’s still something you’d love to do, is finish those games in their half, going at them.”

One man who was crucial to that defence, as well as the points on the board with five out of five kicks landed, was Johnny Sexton, who returned after 12 weeks enforced lay-off observing return to play protocols and wasted no time getting in Mathieu Bastareaud’s way. He did it once to often for his own good but took the French centre with him when leaving the field for stitches and coach Joe Schmidt insisted it was merely a blood injury.

“We knew he was okay, he was off for blood, he had to by sutured, he’s got a few stitches and a shiner. We were more worried about, if that shiner blows up a bit it’s hard to judge distance . . . Our medical team did a HIA (head injury assesment) on him anyway.”

Schmidt admitted it is a worry that Sexton is due to play for Racing Metro against Clermont next week but there’s little he can do about that.

With Seán O’Brien getting the full 80 - save for the seven minutes he made way for Seán Cronin after Rory Best was sin-binned for tripping Thierry Dusautoir - and long-term absentee Cian Healy coming off the bench for nearly 18 minutes, there were positives outside the performance, but Heaslip remains a concern.

“He’s very uncomfortable at the moment, he got a knee in the lower back, so we’ll get him checked out over the bext couple of days. At least we can come up for breath for a couple of days before we begin our preparation for England (March 1st).”

France coach Philippe Saint-Andre snorted derision and allowed himself a chuckle when asked about the performance of referee Wayne Barnes but admitted his should have performed better, despite being “penalised a lot”.

“I think Ireland in the last 20 or 30 minutes they were on the back foot but our discipline let us down. In the first half, with all the kicks in the air, the Irish team was better than us. When we started to keep the ball we scored a great try but congratulations to Ireland.”

“One (Fofana) was perfect and came back, the other was not and didn’t come back.”