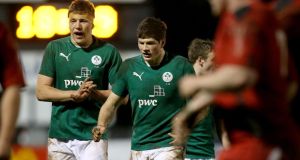 The Ringrose clan, St Michael’s College and UCD can take the most satisfaction from this odyssey. That’s what any journey to the penultimate stages of a rugby tournament in New Zealand deserves to be called.

It has been fraught with peril and still, somehow, Mike Ruddock’s Ireland team are in a World Cup semi-final against England. Considering tomorrow’s opponent beat them 33-9 at Franklin’s Gardens in February the coming power surge may prove overwhelming.

But it’s some feat to get this far without three off the best underage players in the country – Dan Leavy, Seán O’Brien and Peter Robb, while David Busby is another injury-enforced absence.

Leavy, then O’Brien were named captain. Adversity does strange things to young men and Jack O’Donoghue has proved an inspirational, albeit third choice, skipper.

Granted, they have yet to beat a major Southern Hemisphere opponent and did lose to France but they have reached this juncture by scoring tries.

From the big picture perspective this crop looks set to yield some decent professionals.

“Brian O’Brien, who used to be manager of the senior Irish side, used to say if you got three internationals out of an under-21 squad you are doing really well,” said Mark McDermott, coach of the 2004 side that reached the Junior world cup final.

Injury permitting, Leavy should come again but the Leinster think tank already saw enough of Ross Molony to promote him right out of school.

Last year he led St Michael’s to the Leinster Schools Senior Cup final, losing to a Blackrock side inspired by Garry Ringrose, but his age didn’t stop Girvan Dempsey making full use of his growth spurt.

In the recent British and Irish Cup final against a bunch of grizzled semi-pros from Leeds Carnegie, Ben Marshall was helped ashore after seven minutes. Molony arrived and was the outstanding forward in Donnybrook that night.

An English enforcer even tried roughing him up and while he didn’t retaliate you could see he will the next time.

Like Ringrose, he has put on noticeable muscle and there is more to come.

UCD have six players in the squad but St Michael’s arrival as a serious rugby nursery is reflected by the presence of Cian Kelleher, Ross Byrne, Nick McCarthy and Molony.

There are no stars in this team but Ringrose has really impressed in the 13 jersey.

A Blackrock centre retires another one arrives.

Interestingly, of the 14 Leinster players in the match day squad only two are listed in the province’s academy. That’s one of those good problems enhanced by this success. And regardless of the result here, this has been a success.

They have a real chance of making the final but England crushed Italy (63-3), beat Australia (38-24) and survived Argentina (17-16). Their heavy artillery should prove decisive.