England opt for Lee Dickson over Ben Youngs at scrumhalf 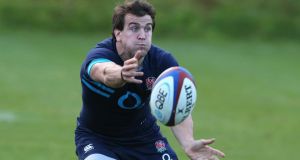 England have selected Lee Dickson ahead of Ben Youngs at scrumhalf for Saturday’s opening autumn international against Australia at Twickenham.

Dickson’s explosive start to the season for Northampton has seen him win the race to partner Owen Farrell at halfback in what will be only his 10th Test appearance.

Youngs, who won two caps for the British and Irish Lions against Australia in the summer, would have been the more experienced option but head coach Stuart Lancaster has chosen the player in form.

Injuries to Manu Tuilagi and Brad Barritt mean Joel Tomkins will make his Test debut at outside centre, partnering Billy Twelvetrees in midfield.

“I’m delighted for Joel. He’s had a great week’s training and is ready for his chance,” Lancaster said.

“He has played in many high-profile games in his career so far and has a great temperament for the big occasion.”

Billy Vunipola’s bulldozing start to the season at Saracens has earned him selection ahead of Ben Morgan at number eight with the Gloucester backrow offering cover from the bench.

It will be Vunipola’s first start for England and his Twickenham debut after winning two caps as a replacement during the summer tour to Argentina.

Wing Marland Yarde will also be making his first appearance at Twickenham after scoring two tries on his debut against the Pumas in June.

“Billy Vunipola and Marland Yarde made a big impression in Argentina and it’s going to be a special occasion for them to run out at Twickenham in front of 82,000 passionate supporters for the first time,” Lancaster said.

One of the toughest selection calls facing Lancaster was in the secondrow but when Geoff Parling suffered mild concussion during training on Tuesday afternoon, the decision was simplified.

As expected Joe Launchbury partners Courtney Lawes with Dave Attwood, who returned from a rib injury only last week, picked on the bench.

Mako Vunipola profits from Alex Corbisiero’s knee injury to start at loosehead, while hooker Dylan Hartley and prop David Wilson have recovered from respective ankle and calf injuries to take their places on the bench.

Australia triumphed 20-14 at Twickenham last November and Lancaster is looking for a successful start to an autumn series which continues against Argentina and concludes against New Zealand.

“We’re looking forward to the challenge of playing Australia – they have made great strides under Ewen McKenzie and their new coaching team and they are formidable opponents,” Lancaster said.

“It’s eight months since we played at our home and we are looking forward to getting back there in what is a very important series for us two years out from the World Cup.

Ben Mowen will captain Australia at Twickenham after James Horwill was relieved of the post.

A second major surprise sees McKenzie elevate outhalf Quade Cooper to the vice-captaincy in preference to Horwill and Will Genia.

McKenzie insists Horwill’s slump in form was the reason behind his decision to strip him of the role he performed against the Lions in the summer.

“There’s no doubting James is a world-class leader, but it’s important he puts his personal performance first and plays to the level we know he’s capable of on a weekly basis,” McKenzie said.

“By his own lofty standards, James would admit he hasn’t been on peak form so we’ve made the decision to remove the added pressures and responsibilities of being a captain so that he can focus entirely on bringing his ‘A’ game.

“Decisions like these are never easy, but sometimes you need to make hard choices for the long-term benefit of the individual.

“A strong individual performance will be the best contribution he can make to this game.”

It has been suggested Horwill would have been dropped altogether but for a knee injury sustained by lock Rob Simmons in training. Mowen made his Test debut against the Lions in June and will captain Australia for the second time after being at the helm for the 14-13 Rugby Championship victory over Argentina.

Offering support is Cooper, whose international career was in tatters little over a year ago after branding the Wallabies environment under former coach Robbie Deans as “toxic”.

“Ben gets another opportunity to lead his country and we’re also recognising Quade for the ongoing decision-making role he plays on the field,” McKenzie said.

“He also continues to make positive evolvements in contributing to the culture of the team off the field. However, like we do every week, we’ll re-assess all selection decisions for next week’s game against Italy.”

Matt Toomua has been preferred at inside centre ahead of Christian Leali’ifano, wing Nick Cummins is back after recovering from a broken hand and Scott Fardy comes in at blindside flanker after overcoming an eye problem.

1 Saracens to accept second 35-point deduction and effective relegation
2 How do Klopp’s Liverpool measure up against greats of past?
3 Shane Lowry’s Abu Dhabi defence crumbles in the sand
4 Michael Schumacher’s family share rare update on condition
5 Johnny Sexton’s value has never been so high
Real news has value SUBSCRIBE