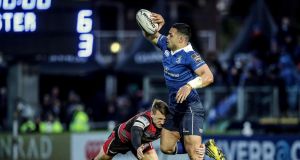 Leinster’s Ben Te’o offloads as he is tackled by Edinburgh’s Tom Brown during the Guinness Pro 12 game at the RDS. Photograph: Morgan Treacy/Inpho

Leinster centre Ben Te’o could step straight from a Leinster shirt into an England one this summer if Eddie Jones can bend the English RFU’s rules on not picking overseas players.

Jones plans to add Te’o to his midfield options as soon as possible, but his availability for the three-Test series against the Wallabies hinges on his eligibility due to Twickenham’s refusal to select players based overseas.

The Auckland-born 29-year-old – a former South Sydney Rabbitohs team-mate of Sam Burgess – leaves Leinster for Worcester at the end of the season and the date of his registration for the Aviva Premiership club will decide his fate.

If England are cleared to take him Down Under, Jones views inside centre as his most likely home.

“Te’o is a possible. The boy can play. He was an absolutely outstanding rugby league player,” Jones said.

“He can go through the line, he has a short passing line and he hits. You don’t want to run down his channel when he is defending at 12.

“Potentially we are going to have three world-class options at 12: Manu Tuilagi, Te’o and Owen Farrell.

“It’s a great situation to be in and then we’ll pick the one who suits the game.”

Another of England’s midfield players has been warned that he needs to spark an upturn in form if he wants to be picked.

Exeter’s Henry Slade missed the Six Nations with a broken leg and Jones has seen little to convince since his return in March that the versatile playmaker should tour Australia.

“Well, he’s got to play. Someone needs to tell him to start playing,” Jones said.

Jones expects England captain Dylan Hartley to return from concussion for Northampton before the end of the season and has earmarked him to play against Wales at Twickenham on May 29th.

Hartley was knocked unconscious in the final Six Nations match against France and if fit will lead the squad Down Under, with Jones even touting him as a possible skipper for the next World Cup.

“Look at everyone who has held up that trophy – they’ve all been outstanding leaders,” Jones said.

“You need a guy who is an outstanding leader. We need to have that and if Dylan keeps doing well he could be that leader for 2019.”