Doubts over several players as Joe Schmidt prepares for Tests 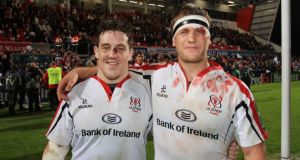 Ulster’s Declan Fitzpatrick who is an injury doubt for the upcoming international Tests and Chris Henry who has signed a new deal, Photograph: Darren Kidd/Inpho/Presseye

The Ireland training squad for the November internationals could be released today. The problem finalising the group for Joe Schmidt’s new coaching ticket seems to be uncertainly over several players who, if fit, would play a significant role against Samoa, Australia and New Zealand.

Also, there was no further news last night about the seriousness of Munster lock Donnacha Ryan’s knee following a scan.

None of the above are expected to feature in their provinces Pro 12 matches this Friday and Saturday.

Munster are already without fullbacks Felix Jones (ankle) and Denis Hurley (medial ligament damage) for their trip to Glasgow.

Another issue surrounds Paddy Jackson. It is unknown whether the 21-year-old will be taking the place-kicks when Ulster face the Cardiff Blues on Friday night following coach Mark Anscombe’s decision to pass the responsibility to Ruan Pienaar for last weekend’s 25-8 victory on Montpelier.

Another problem
This creates another problem for Schmidt at outhalf as the Kiwi has already voiced concern about Johnny Sexton’s over exposure at Racing Metro 92 while Ian Madigan is currently behind New Zealander Jimmy Gopperth in the Leinster pecking order. Pienaar, the recently returned Springbok scrumhalf, landed five from seven penalties attempts last Saturday although Jackson did kick a penalty and converted Andrew Trimble’s try.

“Having him back brings a little bit of spark, obviously his kicking game as you could see at the weekend is something we build on and use as a strength and the other guys have got to learn off that and try to develop their games as well.”

Ulster were able to confirm yesterday that flanker Chris Henry has been re-signed on a three year deal.

“I am delighted to have committed to Ulster for the long-term. This squad is getting better and better,” he said.

The meeting with the All Blacks, victorious in all of their 10 test matches in 2013, on Sunday November 24th was confirmed yesterday as a sell-out.