Despite Kurtley Beale’s likely absence, Wallabies will pack quite a punch

In comparison to the Lions, Australia look to have more invention and game-breakers 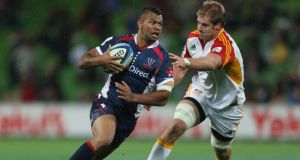 The news that Kurtley Beale has seemingly been ruled out of the upcoming Lions series is a shame, for the player, the Wallabies and the series itself. Lions’ tours come along once every four years for the pick of the British and Irish players, once every dozen years for the hosts. At 24, Beale has probably missed the chance of a lifetime.

Beale is a rare, rare talent. Quick, elusive and a footballer, he can play anywhere in the backline bar scrumhalf. That he could reappear after a month’s suspension by the Melbourne Rebels for an alcohol fuelled fight with team-mates to make such a stunning try-scoring return off the bench in the Rebels’ defeat a fortnight ago against the Chiefs merely underlined as much.

Outhalf when scoring all 14 points in the Wallabies’ last outing in November ( his 80th-minute try sealed a 14-12 win over Wales) no matter his misdemeanours off the pitch or lack of match fitness, at anything resembling his best he’d assuredly have been in the Wallabies team – probably in his best position at fullback.

With Beale taking an indefinite leave of absence from playing and voluntarily entering a private health facility in order to undertake counselling, the odds on him even being in the frame for Robbie Deans’ 25-man squad, to be announced on May 19th, look remote.

Likely absence
For the sake of the spectacle, as well as the individuals, ideally you’d want all the Aussie and Lions front-liners to pitch up with their A game, and Beale’s likely absence compounds the long-term injury to the brilliant David Pocock – another rare being both as a player and a person.

Coming hard on the heels of an injury bedevilled 2012, during which the Wallabies used 41 players and had another 11 established Test players sidelined, Deans could be forgiven for thinking the jinx is returning. Yet if the Wallabies could afford to take the hit of losing two nailed -on Test starters all being well, then the back three and the backrow are probably where their resources are richest.

Beale’s loss also enhances the likelihood of Israel Folau, the phenomenal attacking talent who has bloomed with Michael Cheika’s improving Waratahs. Folau has exploded into form in the last month or so, but he is relatively inexperienced and defensively suspect, so for Deans to start him would be a risk, and thus unlikely. But a bench impact role in the tests looks likely.

Similarly, in the backrow and even in the absence of David Pocock, if the Wallabies are able to overlook the Reds openside Liam Gill then they must have an embarrassment of riches – and that could well be the case, even though Gill is superb at the breakdown and takes great lines. Ditto the Waratahs’ openside Michael Hooper, brilliant on the ground with his low centre of gravity. Heck, he even looks a little like Pocock.

Yet both could conceivably miss out, thanks to the red hot form of backrowers such as the ball-carrying Rebels number eight/blindside Scott Higginbotham, Dave Dennis of the Waratahs and the 32-year-old George Smith, who has delayed his return to Japan to be available for this series. Smith has been a key factor in the Brumbies’ charge to the top of the Super 15 table this season and is sure to start.


Wallabies’ fulcrum
Deans will also have been encouraged by the return to form and fitness of experienced Reds campaigners, James Horwill (the Reds captain and likely to lead the Wallabies too), Will Genia and the mercurial Quade Cooper. At his best, Genia is probably the best scrumhalf in the world and will be the Wallabies’ fulcrum and in tandem with the rejuvenated Cooper, out of sorts and out of favour last year, both are even better when renewing an intuitive partnership that goes back to their schooldays.

Nor with a frontrow of Ben Robinson, Stephen Moore and James Slipper or Ben Alexander, nor will the scrum be anything like the he Wallabies’ Achilles heel of yore.

And as much as fullback, a signature selection will be at inside centre, where Christian Lealiifano has been keeping Pat McCabe out of the Brumbies team, in part for his goalkicking as well as his footwork and creative footballing abilities. If Deans goes down the same route then all the indications are that the Wallabies will be like the Brumbies and Reds in high tempo style, full of footwork and clever angles.

Granted, the new ‘conference’ style of the Super 15, with its increased preponderance of derbies possibly distorts the table in the Australians’ favour, but even so, by comparison, the Lions do not appear to have as much in the way of invention and game-breakers.

Put another way, little about Owen Farrell’s performance for Saracens in their Premiership semi-final defeat to Northampton dispels the feeling that Jonny Sexton’s wellbeing is more critical to the Lions’ hopes than anything else.

For sure, the Lions have a strong squad and the Gatland factor, but the Wallabies at 6/5 outsiders look like generous odds.