Dan Carter looking to finish off with one final defining moment 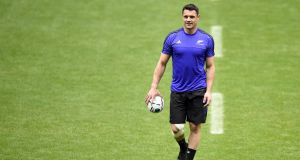 Anyone with even a passing interest in rugby has a Dan Carter moment.

There are hundreds of examples of his thrilling brilliance, dozens of near perfect performances.

Most people presumed they would never see another.

When Aaron Cruden did his knee earlier this year Carter was struggling to remove Colin Slade from the Crusaders ten jersey. Beauden Barrett was shining for the Hurricanes while Lima Sopoaga’s form was guiding him straight towards the All Blacks squad.

Carter had been struggling with calf and other 33 year old niggles dating back to 2012.

The greatest outhalf on the planet for about eight years seemed a fading force. Then Cruden got injured and Carter stayed fit.

Still, he looked a shadow of his former self. The groin tear before the 2011 quarter-final, the 2007 injury during the quarter-final defeat to France and being Carlos Spencer’s under-study in 2003 seemed set to be his World Cup legacy.

Barrett’s a fine goal kicker, has winger pace and throws a killer lateral pass. He was primed to be New Zealand’s first choice outhalf until Sopoaga, winning his first cap, helped engineer victory over South Africa in Johannesburg.

The future, seemingly, had arrived.

He kicked five conversions and two penalty goals in the 41-13 defeat of Australia but it’s what happened in 22nd minute, with the score poised at 3-3, that proved there was one more chapter to write in the greatest ever outhalf story.

Hooper carried into Jerome Kaino and Brodie Retallick, which allowed Sam Whitelock to steal the ball in New Zealand’s 22. Aaron Smith went wide to Nonu to Conrad Smith to Julian Savea as all of a sudden they were up to their ten metre line.

Smith to Nonu to Carter. Then we saw it; that old verve of his left James Horwill for dead. He drew two more defenders before putting Dane Coles in for the try.

Throughout the defeat of France this month we could have been watching Carter from 2005. That drop goal in the semi-final against South Africa and his game management proved the difference.

And still, at today’s captain’s run press conference he was asked if tomorrow will be his career defining game.

“No, I don’t think so,” Carter responded in his usual polite manner.

“Obviously it’s a huge occasion after some of the disappointments I’ve had in previous World Cups, but it’s not really something I’ve been thinking about, the past or what may happen after the final whistle.”

New Zealand coach Steve Hansen felt the need to interject: “Can I just add to that? I don’t think a guy who has played over 100 Test matches, like Dan has, his career is not defined by one game. I think he’s really defined his career: it’s been one of greatness.

“He’s added to the All Black jersey in many, many ways and over many, many Test matches. So yeah, it is an important Test match for him and everyone involved, but it certainly won’t define his career. That’s certainly already been written in the history books.”

Hansen was asked to elaborate.

“As I’ve said before, he’s enhanced the jersey...when you think about

(Grant) Fox, (Earle) Kirton and (Andrew) Mehrtens - when those guys left they all said we couldn’t replace them.

“So, a little fellah from Southbridge has done that. He’s done it in a nice way, he’s a pretty humble bloke. He brought a new dimension to first-fives, he has brought tackling.

“I don’t think Foxy made one in his career, Mehrts didn’t make too many either to be quite honest, but the modern day first-five-eight has to tackle and that’s a legacy he’s left for all first-fives, something they’re probably not that keen on, but they have to do it.

“He has raw courage, his goal-kicking has been great, and the other thing I admire about him is that he’s gone through a bit of adversity in the last few years and it would have been easy, since he’s done everything in the game, to walk away and say ‘well, enough is enough.’

“But instead, he wanted to finish playing well and he’s done that.

He’s come back from those injuries and he’s in good form, so the other good thing about him is he’s a normal, good bloke. He likes a beer, he likes a laugh and he’s nice company.”

Carter really did seem like a broken down classic sports car these past few seasons. It’s what makes his performances these past few weeks so astonishing.

“It’s the love for the All Black jersey,” he explained. “It’s something I have always loved to do. In 2003 I first got a taste for it. I never wanted it to end. I had a pretty good run for the first eight years of my career. Then found it pretty tough with injuries and form. It’s just that love for the jersey and wanting to play at the highest level, represent the country, play alongside your best mates.

It’s something that really gets you through those tough times when you are injured and rehabbing.

“There were moment when I thought it might be the end but I fought through that and where I am today I am pretty grateful for that and grateful to the coaches for sticking by me as well. It’s been a big part of my motivation was repaying their trust in me as well.”

In 2011, immediately after the World Cup he really didn’t feel he won, Carter could have made a fortune in France - where he replaces Johnny Sexton at Racing Metró 92 next month - but instead he signed a four year deal with the NZRU.

“In the back of mind after 2011, the reason I signed the four year deal, was to give myself another chance at a world cup. It was pretty far-fetched thinking, looking ahead, so that was always in the back of my mind, to be here. I just wanted to be a part of this side at the world cup, it has been driving me for the last couple of years.”

The end of this story comes now.

1 Saracens to accept second 35-point deduction and effective relegation
2 Welcome to Iten in Kenya – home of champions and cheats
3 James Lowe relishing the work, rest and play of his Irish rugby adventure
4 How do Klopp’s Liverpool measure up against greats of past?
5 Shane Lowry’s Abu Dhabi defence crumbles in the sand
Real news has value SUBSCRIBE