CJ Stander’s Ireland debut may be sooner than expected

Ireland are chasing an unprecedent hat-trick of Six Nations titles, but as Joe Schmidt's team enter this campaign without Paul O'Connell, can other senior players fill the void left by his absence? John O'Sullivan reports. Video: David Dunne 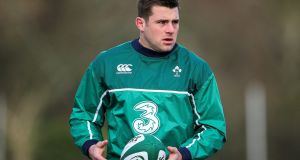 Munster stand-in captain CJ Stander has been in excellent form for the province this season. Photograph: Cathal Noonan/Inpho

CJ Stander could be set for a surprisingly swift full debut for Ireland against Wales on Sunday. The South African-born backrower is likely to be named at blindside flanker when Joe Schmidt unveils his hand at 2pm today for Ireland’s opening defence of their Six Nations title.

Furthermore, amid growing concerns about the hamstring injury that has sidelined Seán O’Brien from training since last Tuesday, there appears to be every chance that Stander’s Munster team-mate Tommy O’Donnell will be recalled at openside.

The inclusion of Stander and O’Donnell would give some ball-carrying ballast to a pack that has been deprived of the retired Paul O’Connell and the injured Cian Healy, Iain Henderson and Peter O’Mahony, as well as, potentially, O’Brien.

That absent quintet, along with Mike Ross and Marty Moore, were all involved when the countries’ met last March in Cardiff, which gives an indication of the injury toll that has afflicted Schmidt in the run-up to Ireland’s bid for a third title in succession.

To compound Tommy Bowe’s absence, there is also concern over Rob Kearney, who has also apparently been troubled with a hamstring strain this week. No less than O’Brien, if Kearney’s time on the training ground has been limited, then given Schmidt’s preference for his starting XV to have been fully involved throughout match week, that could lead to a further change.

One option would be to play Jared Payne there, where he has made an impressive return with Ulster from the broken foot that sidelined him during the group stages of the World Cup. That might have been a viable option had Luke Fitzgerald been available at inside centre, where he has been in excellent form this season, but his latest injury means accommodating Payne at fullback would lead to a debut for Stuart McCloskey inside of Rob Henshaw.

That has a raw look to it, especially against Jamie Roberts and Jonathan Davies, who will be playing their 40th Test together; and it looks unlikely too given how Schmidt wondered aloud whether pitting Garry Ringrose against them was the best thing for his development. It seems likelier that Schmidt will renew his favoured partnership of Henshaw and Payne, which has never let Ireland down.

Injuries to both have restricted the partnership to just seven games – and only once this season, in the final World Cup warm-up game away to England. Coupled with the loss to Wales in last season’s Six Nations, they are the only two defeats suffered in those seven outings together.

Up front, the likely frontrow permutation given the injury toll is Jack McGrath, Rory Best and Nathan White, with Mike McCarthy’s scrummaging and good form this season possibly earning him a start alongside Devin Toner.

The other contentious issue is the wings, where Keith Earls, Dave Kearney and Andrew Trimble appear to be vying for two spots, all the more so if Zebo starts at fullback.

The most eye-catching selection may be the backrow. Stander has been in phenomenal form as a stand-in captain for Munster, with his voracious ball-carrying and poaching at the breakdown, attributes that could offset the loss of O’Brien and O’Mahony.

Although he has only played a couple of games at blindside this season, wearing number six should not militate against Stander getting his hands on the ball. To an extent too, this selection could also perhaps best offset the twin threat posed by Warren Gatland’s inclusion of both Sam Warburton and Justin Tipuric.

That Paddy Jackson has been released back to Ulster for their game against the Dragons is a clear indication that Ian Madigan will be name amongst the replacements.