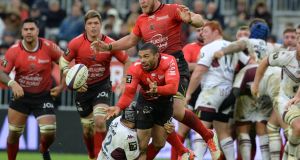 Toulon have released Bryan Habana for the next two rounds of the World Rugby Sevens Series. Photograph: Afp

South Africa winger Bryan Habana has moved a step closer to playing in this year’s Olympic Games in Rio de Janeiro after he was named in a training squad for the next two rounds of World Rugby’s Sevens Series.

The South African Rugby Union (SARU) has reached an agreement with French club Toulon to release the 32-year-old for the events in the United States and Canada next month.

“Bryan is an unbelievable rugby player and his outstanding playing record and achievements in the Springbok jersey speaks for itself,” South Africa Sevens coach Neil Powell said in a statement on Monday.

“I am really excited by the prospects of him joining our training squad.”

The 2007 Rugby World Cup winner made his only two Springbok Sevens appearances in 2004, in Wellington and Los Angeles, a couple of months before his test debut.

“I can tell you Bryan is very eager to learn,” Powell said.

“He realises that it’s been a very long time since he last played Sevens, but he is excited by this challenge and really looking forward to be part of our system.”

Habana, South Africa’s leading try-scorer in tests with 64, joint-second on the all-time list with Australian David Campese, will link up with the Springboks Sevens squad for their training camp in Stellenbosch on Tuesday.

The Sevens tournament in Rio will run from August 6th-11th, the first time the sport has been played at the Olympics. The 15-man game was played in four previous Olympics, the last being in 1924 when the gold medal was won by the U.S.