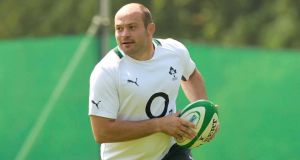 Rory Best will captain Ireland on the tour. Photograph: Inpho

“Very happy to be involved going forward,” said Kiss at yesterday’s announcement of a 28-man squad to tour North America with Test matches against the US Eagles in Houston on June 8th and Canada in Toronto on June 15th

A forwards expert and other technical coaches will be recruited later this summer. In the meantime, Schmidt will join the squad a few days before the US game, after attending a Six Nations conference in Rome, with Kiss supported by Anthony Foley, Gert Smal and former Ulster scrumhalf Neil Doak.

Sport is cyclical. In 2000 an Ireland squad embarked on a two match tour of North America with a raft of young talent that created a dynasty, yielding four triple crowns and a Grand Slam from 2004 to 2009, making it the most successful period in Irish rugby history.

It has been evident since November that there are new caretakers of the green jersey, with the new breed being led by Rory Best in the absence of Lions tourists Jamie Heaslip, Brian O’Driscoll and Paul O’Connell.

The squad, without the Leinster and Ulster players preparing for Saturday’s Pro 12 final, will train at the University of Limerick this week before shifting to Carton House on Monday.

Marshall has been stood down for the summer after suffering consecutive head traumas in the Six Nations against Scotland and Italy.

However, Ryan and Gilroy are more rested than enforced absentees, with both available to answer Warren Gatland’s call from Australia at a moment’s notice. The same applies for Best and Ian Madigan.

Peter O’Mahony is vice captain and may also be employed at number eight as his Munster team-mate James Coughlan didn’t make the cut.

“The Luke Marshall decision was called some time ago, just [to give him] time off [to recover]. Craig has been managing his groin, he could play and train but it was thought that in the context of this tour it was an opportunity to get it completely right. By no means was he ruled out through injury.

“There are bigger challenges ahead,” Kiss added, a clear reference to November visits to Dublin from Samoa, Australia and New Zealand.

“But if you called Donnacha he would play in your team tomorrow. Everyone plays with injuries but there was an opportunity for Donnacha to work on a few things and get in some recovery processes.”

Kiss went on to say Devin Toner’s recent form for Leinster has been “fantastic”.

Those on stand-by, in case of injury or Lions call-ups, include Shane Jennings, Donncha O’Callaghan and Damien Varley.


Held his ground
“Young Cathal Marsh did an exceptional job the other night in the B&I Cup final,” Kiss explained. “I spoke to Girvan Dempsey and Newcastle targeted him but he held his ground and played a big part in the victory.”

Ulster’s Stuart Olding and Connacht’s Robbie Henshaw are cruelly snatched away from Mike Ruddock’s Ireland under-20s backline, also preparing for next month’s Junior World Cup in France. Both players have enormous potential with Henshaw expected to feature at outside centre as Darren Cave is the only established 13 in the squad, although Fergus McFadden will have something to say about that.

Ronan O’Gara retired the other day, as did Horan and Murphy. Talented kids aplenty, this feels like the start of something.