Australia boosted by return of David Pocock and Israel Folau 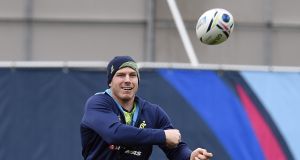 Australia’s chances of toppling Argentina in Sunday’s World Cup semi-final have improved after David Pocock and Israel Folau were passed fit for the Twickenham showdown.

The pair were injured during the final group outing against Wales and were forced to sit out the 35-34 victory over Scotland, but have recovered from their respective calf and ankle problems.

Pocock has been among the players of the tournament due to his work at the breakdown – the number eight was a key component of the win against England – and Folau is one of the sport’s most dangerous runners from fullback.

Ben McCalman and Kurtley Beale drop to the bench to make room for the returning duo.

The only disappointing element of an otherwise pleasing injury bulletin from Friday morning’s training session was prop Scott Sio’s failure to recover from his elbow complaint, so James Slipper starts at loosehead.

“James has been pushing for a starting spot with his performances as a finisher and I know he’ll take it with both hands,” head coach Michael Cheika said. “James is a leader in our squad and has performed well through this tournament so far and in the lead-up matches.

“This weekend is a great opportunity for the lads to improve on last week and take advantage of the chance to play on such a big stage. This weekend we want to make Australia proud of their team.”

Openside Michael Hooper will make his 50th Test appearance and wing Drew Mitchell is just one try short of drawing level with Bryan Habana and Jonah Lomu as the leading World Cup leading try-scorer of all time.

The 31-year-old was handed a one-match ban for a dangerous tackle against Namibia, missing the last-eight triumph over Joe Schmidt’s Ireland in Cardiff last weekend.

Captain and hooker Agustin Creevy is fit to start the Twickenham showdown after leg trouble forced him out of the second-half against Ireland.

Creevy’s potent scrummaging and sageful leadership will hand the Pumas a big boost for their second semi-final in eight years.

Creevy’s presence alongside Leicester’s big-scrummaging loosehead Marcos Ayerza is sure to trouble the Australians, who have lost their scrum anchor Sio.