All things Aussie and Kiwi firmly en vogue and we Irish are prepared: arise and follow Schmidt 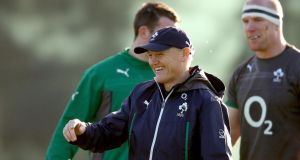 It feels like we’ve spent a long time up the rude creek without a paddle, wading through the chaos, listening to the red-faced fellas in suits blaming it all on each other, as Ireland’s sporting endeavours, normally the saviour of the fragile national mood, failed to throw us a lifeline.

So maybe that’s why there’s a palpable sense of giddiness about the place.

We’ve a soccer manger we can understand, a rugby team who has remembered how to score tries and a Taoiseach who in a certain light, if you really squint, could pass for an Irish Roger Moore. What more do we want?

With the combined adrenalin-high of a convincing victory, a flawless post-match performance from Joe Schmidt, an assured press “show” from Martin “Woody Allen” O’Neill plus the psycho- smiley Roy Keane and the reclamation of our sovereignty (I was wondering where that had got to) sure what was all the fuss about?

You’d imagine we should at least have the inside track and have a grasp of the southern hemisphere lingo.

Mislaid in translation
But having just got my head around his vernacular, I’ve realised that when Joe Schmidt advises halting the opposition by “chopping their leeks” he’s actually referring to tackling very low around the two things they run with, as opposed to slicing their vegetables.

And while Australia will surely provide a sterner test than Samoa, after last Saturday’s selection of shuddering blindside hits on several Irish backs, Fergus McFadden, especially, on the receiving end of one which would have had me still receiving treatment, we can hardly expect the Aussies to be more physically intimidating than the islanders.

Although McFadden looked a little stunned, he still managed to keep intact the black tape around his head. What the purpose of said tape is I’m not entirely sure, but he seems to like it.

Maybe it’s for keeping his hair on, although D’Arcy doesn’t seem to need one for his beard. What is going on with that beard? It can’t be a nod to November as it took root a while back. Is he growing vegetables down there? Preparing for life on the high seas? Whatever the reason, surely someone can have a word!

We’ve been warned by the experts not to take Australia lightly, which, while it’s good advice, you’d wonder why Ireland would need reminding. With a scrum that apparently is back on track after out-muscling Italy last week and a pacy three-quarters that can easily run amok, this will indeed be, as Schmidt puts it: “A reality chick.”

But perhaps Ireland’s greatest weapon is the coach. Players seem to fizz with purpose when he’s at the helm, while he calmly exudes a kind of unguarded, matter-of-fact honesty. Qualities which, when you’re confronted with them, feel strangely rare in Irish public life. Apart from the banks, FAI and the Dáil, obviously.

Across the water Sky Sports’ “exclusive” coverage has billed England’s meeting with the world champs as a “show-down” with the added edge of Kiwi “revenge” for last year’s record defeat in the same venue.

Inconvenient facts
The fact that the entire All Blacks squad were jelly-legged after a severe dose of food poisoning has not featured prominently in Sky’s build-up. Maybe they were poisoned

This week, the Lion King himself, Ian McGeechan got involved, penning an article carrying the headline : The way you beat the All Blacks.

It’s scientific stuff, admittedly, and the kind of analysis which proves beyond doubt that you need to have played at the highest level to truly comprehend the head-scratching complexity of the oval-ball game.

Thank goodness for Geech. He didn’t list such fundamentals as “run forward with the ball” or “score more points than them”, or indeed “food-poison them”. But perhaps that’s an insight into why Geech’ has never won a Lions series against them.

With Wales suffering three injuries on the way to being pulverised by the massive Springboks, the reaction in Cardiff has been typically downcast – with the usual dollop of unrealistic pre-match expectation providing another false dawn.

It’s hard to have any sympathy for the Welsh. What have they ever done for us? St Patrick? The Edge? Leeks to go with our potato soup? Jonathan Davies instead of you know who in the 13 shirt this summer?

And then just when we needed them, they break ranks with their Celtic brethren, row- in with the English and French vultures and put the mockers on the Heineken Cup!

Are Australia a better team now than when Ireland last played and beat them in the World Cup two years ago? Not in my view, but then again I am a mere observer and not blessed with the expert pundit gene.

But as Prof McGeechan might put it: “Any team that wants to beat Australia has to do it by having the ball.” He hasn’t said that yet, but one day he surely will.

Prediction? Ireland to win with nothing to spare.