All Blacks look to make history in Bledisloe Cup match 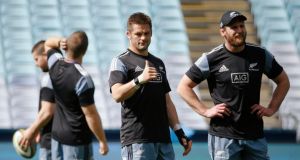 Captain Richie McCaw with team-mates at a New Zealand training session ahead of their Bledisloe Cup match against Australia on Saturday in Sydney. Photograph: Reuters

At 8.05pm local time in Sydney, or 11.05am Irish time on Saturday morning, New Zealand will attempt to establish the longest winning sequence in the history of Test rugby with an 18th successive win in their Rugby Championship opener against Australia.

And so the achievement will assuredly spark that hoary old chestnut as to whether these All Blacks are indeed the greatest rugby team of all time.

Alternatively, the question could just as easily read “are they the best New Zealand team of all time?” for it probably amounts to the same thing such has been the All Blacks’ supremacy of the sport.

For sure, this hasn’t always been reflected in World Cups, but over the course of the game’s history they have invariably set benchmarks and redesigned the game like no other.

It is a debate that was given a pertinent twist last November by the England head coach Stuart Lancaster when he rated the current All Blacks’ side as the best team in world sport, all the more so when retaining their hunger and desire to keep winning in the fall-out from claiming the William Webb Ellis Trophy in Eden Park in 2011.

“In world sport could you tell me a team that has a record like that internationally? I don’t think any of the football teams have got it. Spain, for example? In cricket no one has it.”

Having been taken to the brink of defeat by Ireland at the Aviva Stadium last November before ultimately recovering from a 19-0 deficit to win with a Ryan Crotty try in overtime and a match-winning conversion at the second attempt by Aaron Cruden, Graham Henry reckoned this team had even eclipsed his World Cup-winning class of 2011.

“This side is the best rugby side in the world right now, and may be the best rugby side who’s ever played the game,” he said. “There’s not too many areas where you think you can improve. I think they’ve made great progress in their running lines, particularly the forwards, and carrying the ball in two hands. The lineout is impenetrable at the moment.”

As the Aviva game highlighted, and indeed their epic 38-27 win over South Africa in Johannesburg last October, these All Blacks also seem to thrive the more a team throws at them, such is their belief in each other and their defence, as well as their fitness and their skill set throughout whatever XV they have on the pitch at any one time, and their ability to conjure tries from anywhere.

Led by the truly legendary Richie McCaw in his 128th Test, they will certainly have a statistical claim to being the greatest team of all time should they surpass the mark of 17 test wins set by the 1965-69 All Blacks captained by Brian Lochore, who are credited with inventing phase play, and equalled by the 1997-98 Springboks coached by Nick Mallett.

To do so in the ANZ Stadium against a resurgent Wallabies would be a further feather in their cap following the Waratahs’ first Super Rugby success with their 33-32 victory over a Canterbury Crusaders side featuring McCaw, Dan Carter and Kieran Read in this month’s final at the same stadium. Ewen McKenzie has picked seven of Michael Cheika’s team in his starting line-up, including Kurtley Beale to give the Wallabies an X-factor at number ten, as Australia chase their own eighth win in a row. “Against the All Blacks, you’ve got to go out there and have a crack. We need to take a few risks,” said McKenzie.

Similarly, Steven Hansen has opted for a form selection, notably in preferring Ben Smith at full-back ahead of World Cup winner Israel Dagg. The only other change to the side which completed a 3-0 series win at home to England in June sees Wyatt Crockett in at loose-head prop for the sidelined Tony Woodcock. Centre Conrad Smith was to return from a hand injury but returned home to be with his wife Lee-Anne for the birth of their first child, and so Malakai Fekitoa plays only his third test against the experienced, in-form Adam Ashley-Cooper.

A shot at history assuredly adds to the pressure on these All Blacks. While Cruden has proved himself a more than able deputy in recent years, it’s a pity that Carter is sidelined for the 12th time in their last 18 tests. Indeed, the lack of a Carter at his peerless peak is another cause for reluctance in nominating these All Blacks as the best of all time.

Carter was in his pomp when the team captained by Tana Umaga won 22 from 23 matches between 2004 and 2006. Think of the legendary names in the All Blacks’ 1987 World Cup winners which did not lose for 23 matches until 1990 - Buck Shelford, Michael Jones, a young Sean Fitzpatrick and the Whetton brothers up front, David Kirk and Grant Fox at half-back, John Kirwan on the wing - and it’s hard to put the current group ahead of them. And that’s before factoring in non-New Zealand sides such as the Mark Ella-inspired Wallabies of the mid-80s.

As ever, comparisons are odious and largely a matter of opinion in such an ever-changing sport. Nonetheless, were the 2011 World Cup triumph to be added to the last two Rugby Championships (viewed in that light these All Blacks have won 36 and drawn one of their last 38 tests, their only defeat being a 2012 end-of-year defeat to England at Twickenham amid reports of food poisoning in their camp) then there would be a compelling case in their favour.

And all the more so, of course, were the current lot to continue extending their record.

1 Welcome to Iten in Kenya – home of champions and cheats
2 Saracens to accept second 35-point deduction and effective relegation
3 How do Klopp’s Liverpool measure up against greats of past?
4 Johann van Graan makes two changes for Munster’s last stand
5 Sonia O’Sullivan: How did Melbourne become the world’s most polluted city?
Real news has value SUBSCRIBE

Leo Cullen: Benetton will play hard to beat in Treviso 06:00
Un De Sceaux bids to become rare 12-year-old Grade One winner 06:00
GAA hopeful club finals crowd will not be hit by date change 06:00
Connacht determined to make Montpellier clash count for something 06:00
Novak Djokovic the man to beat yet again at Australian Open 06:00
Here is your handy guide to sport on television this week