All Blacks in no mood to surrender winning record against France 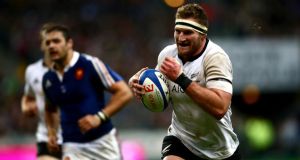 World champions New Zealand earned their 12th victory in as many games in 2013 by beating France 26-19 and handing their opponents an eighth straight defeat against the All Blacks at the Stade de France.

New Zealand relied on a sturdy defence and Dan Carter’s boot before winger Charles Piutau and Kieran Read’s tries sent them clear, only for France to come close to a remarkable comeback.

New Zealand, who started a tour that will take them to England and Ireland on November 16th and 24th with a 54-6 hammering of Japan last weekend, did not exactly shine but produced some neat rugby throughout.

“They are two proud nations and there was no quarter given today,” New Zealand captain Richie McCaw told a pitch side interviewer.

France, who will face Tonga next Saturday and South Africa the following weekend, enjoyed some decent spells of possession in the first half but lacked sharpness in the decisive moments of the game.

“We came really close but they were more efficient. Hats off to them,” said France captain Thierry Dusautoir.

France were clearly not helped by the fact that scrumhalf Parra and flyhalf Remi Tales were paired for the first time as manager Philippe Saint-Andre continues to tinker with his halfbacks since taking over from Marc Lievremont after the 2011 World Cup.

New Zealand were denied an early try after video refereeing ruled Cory Jane had dropped the ball as he was tackled by Maxime Medard before touching down on the right corner.

France took the lead in the 10th minute thanks to a Parra penalty after McCaw had failed to release the ball. However, a couple of routine penalties by Carter soon put New Zealand in front.

France had their first decent run towards the line in the 20th minute but lost the ball in the All Blacks’s 22.

As the French scrum gained the upper hand, Les Bleus had another penalty, which Parra converted, only for Carter to put his side ahead again with a 48-metre penalty kick.

New Zealand’s defence was put to the test when France made some serious drives by the five-metre line with Medard, Tales and Wesley Fofana looking close to diving over.

Les Bleus, however, were only rewarded for their spell of possession with a penalty, which Parra safely converted.

With the visitors clearly on the back foot, France piled on the pressure and the All Blacks were penalised again for an offside position, giving Parra the chance to add a fourth penalty on the stroke of halftime, only for the Clermont scrumhalf to fluff an easy attempt.

Parra and Carter traded penalties early in the second half and the first try was scored by New Zealand when Piutau toed ahead Ben Smith’s low kick and touched down.

Carter converted before being replaced by Aaron Cruden, who added the extra points after Piutau brilliantly flicked the ball back to Read for the number eight to go over in the 67th minute.

France reduced the arrears when Dulin touched down on after a fine pick-and-go phase to the line.

The Stade de France crowd roared in anticipation when the forwards bulldozed past the line in the 73rd minute, but the ball had clearly not been grounded, leaving Les Bleus still waiting for their first win against the All Blacks since 2009.