Rapidly-emerging scrum-half has made impressive progress at Munster 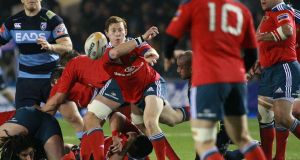 Munster’s Cathal Sheridan gets a pass away during a RaboDirect PRO12 game against Cardiff. “It’s really early in the season yet. As a team, and as a player, we haven’t really done anything yet.” Photograph: Darren Griffiths/Inpho


Rob Penney takes particular satisfaction in helping to oversee the progress of so many young players in a continuing time of transition for Munster.

And arguably no player epitomises this more than the rapidly-emerging Cathal Sheridan.

It was only a week ago last year that Sheridan made his competitive debut as a replacement at Thomond Park in the 30-3 Rabo Pro 12 win over Edinburgh.

But such has been his progress since then that tomorrow he will make his 22nd appearance, having effectively become Munster’s back-up number nine to their Lions scrumhalf Conor Murray.

One ventures he can therefore be taken at his word when he says he was shocked by the news, which Penney and his assistant conveyed to the squad on Wednesday of last week.

“I think like any player, I assume they’d probably all tell you the same thing, we were as shocked as anyone when we heard the news.

“There was no point in saying anything else but at the same time, Rob’s got his own personal decisions to make.

“It’s obviously disappointing because we’re going quite well, but I think himself and Simon, when they said it to us, as they have been since they got here, they were incredibly professional about it.

“They said ‘we’re halfway through the season, we’ve a quarter-final to look forward to, we’re fighting for a Rabo semi, there’s no point in shaking hands, saying goodbye’.”

“So, we’re halfway through a job and we’ll say our goodbyes and the tears and everything like that at the end of the season when hopefully we’ve got a bit of silverware.”

Heads down
Hence, in a sense, for Sheridan nothing has changed.

“It was a very matter of fact meeting the guys had with us. It was ‘this is what’s happening, this is the situation’ which I think was good. It’s been the way they’ve dealt with us since they got here. They don’t deal with us as lessers or anything like that, they just spoke one on one and said ‘this is the situation, now we deal with it’.

“And it made us focus, the second we went out on the pitch, we focused on Cardiff, and it showed at the weekend. Hopefully that will be the way for the rest of the season.”

Having impressed in the second half of last season with his composure, speed to the breakdown and crisp pass, Sheridan provided further evidence of his composure when making his Heineken Cup debut as a seamless 17th-minute replacement for Murray in the bonus point home win over Perpignan at Thomond Park in December.

The same attributes applied a week later when he played the full 80-plus minutes in that dramatic endgame win away to the same opposition.

Sod’s law then decreed that he’d suffer a medial ligament injury akin to Murray in the New Year game against Ulster. That forced him to sit out the January Heineken Cup wins away to Gloucester and at home to Edinburgh before returning as a replacement in the half-century haul against Cardiff.

Next step
He pays huge tribute to Munster’s medical, and strength and conditioning staff, in noting both the irony and frustration of his injury, with the low points being “probably every night, I’d say”.

He adds: “It’s like when it gets past 10 o’clock your mind starts to go a bit crazy. But look, you trust the guys you work with an awful amount and they give you a lot of confidence every day you work with them. They’re not going to lie to you. They’re not going to fill you with a load of crap. They’re going to tell you if things are going well and if they’re not, it’s how we’ll move forward and what’s the next step. They were just excellent the entire way through.”

Hard work and patience he cites as more important factors than talent in enabling the 25-year-old, Sligo-born scrum-half to travel a circuitous route via UL Bohs, the Munster sub-Academy and a development contract to this season’s first one-year deal (which has already been extended by a new two-year deal) in what he agrees has been a season of success for both himself personally and the squad. But only so far.

“At the same time it’s really early in the season yet. As a team, and as a player, we haven’t really done anything yet.

“We’ve played well, yeah. We’ve got a good record, made a home quarter-final and that’s excellent but if we do nothing else after that we’ve achieved nothing this year.

“I remember thinking when I was a young fella every little step you’d be happy enough. Happy enough maybe just to get an academy spot, happy enough to secure a professional contract, but you learn very quickly that it’s never enough.

“You always want something more and you don’t quite realise that when you first get into the game, but that’s the way it works.

“Maybe even the likes of Brian O’Driscoll, I don’t know. He has pretty much done everything there is to do in the game and I’m sure he’d tell you that he probably wants more.”