Gopperth and Boss start at halfback for Leinster

Ian Madigan and Eoin Reddan on bench. Brendan Macken chosen in the centre for game against Ospreys 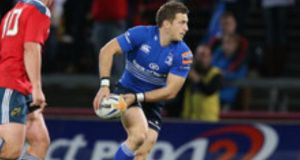 Leinster coach Matt O’Connor has chosen Jimmy Gopperth as his starting outhalf for tomorrow’s Heineken Cup clash with the Ospreys at the Liberty stadium (6.0), partnering him with Isaac Boss at halfback.

Ian Madigan and Eoin Reddan are listed among the replacements. Brian O’Driscoll and Lote Tuqiri miss out through injury so the 22-year-old Brendan Macken will make his Heineken Cup debut at outside centre, forming a midfield partnership with Gordon D’Arcy.

The pack is unchanged from the one that started the defeat to Munster last weekend with Jamie Heaslip leading the team. Flanker Kevin McLaughlin and wing Fergus McFadden will both be making their respective 99th appearances for the province in Swansea.

Devin Toner and Mike McCarthy form the engine room in the second row Ireland’s first-choice props Cian Healy and Mike Ross are either side of the in-form Sean Cronin in the front row. Sean O’Brien starts at openside flanker.

Meanwhile Leinster ‘A’ coach Girvan Dempsey said that the squad are determined to get off to a positive start against Ealing Trailfinders at Donnybrook on Sunday (2.30): “The squad have trained really hard in recent weeks and the attitude of the players has been first class, which will hopefully bode well for the visit of Ealing to Donnybrook.

“The beauty of the B&I Cup is that there’s an element of the unknown each year in terms of personnel who will be featuring as well as opposition. We have scouted Ealing and they are a strong side; big and hardened up front and a lot of pace out wide.

“We know from experience how difficult championship sides are and they will benefit from playing week by week, but from our point of view there are a number of players from the academy, wider senior squad and several club players who will be fired up to make an impression. It should be a competitive game and one which we’re all really excited about.”