Good to have Paulie back with Sexto and Drico, roight goys?

But will D’Arce be cast away again and baby-face Marshall face bad boy Gats? 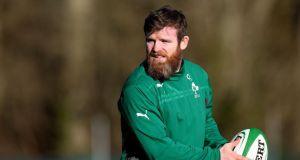 There were some pretty scary moments in Ireland’s opening Six Nations match-day last weekend, such as Tom McGurk’s pallor announcing the withdrawal of Paul O’Connell, anytime Brian O’Driscoll went into contact and the colour of the shirt, tie and jacket combination worn by Hook and Pope.

That was definitely the worst selection of the weekend. Popey’s attire especially, causing a considerable glare in my sitting room as he managed to make your average check-slacked American tourist look like a bank official.

It couldn’t have been a better start for Joe Schmidt. Ireland winning, but not playing so well they might get fancy notions – we all know what happens in the next outing when that happens – and even if Scotland played like they had just met each other for the first time, there were fleeting glimpses of magic to savour.

Mainly from Johnny Sexton, who’s slashing clean break was a nod to the era of Wales’ Phil “the hare” Bennett. A reminder of how rarely you see a player find gaps in the modern game and not get clobbered.

The pass to Jamie Heaslip alone deserved a try but somehow Jamie will have to live his life knowing he was forced to put a foot in touch by the 5ft 9in, 13st-something Max Evans. Wasn’t he in a boy band as well? Just thought I’d throw that in there.

Paranoid
Apart from that Heaslip was superb, but when Tony Ward decided he was a worthier man of the match than Peter O’Mahony you could hear the groan all the way from Limerick. Don’t worry Munster fans, just because you’re not paranoid, doesn’t mean everyone isn’t against you.

Sexton was, of course, another candidate, carrying, as he does, the weight of the nation on his shoulders, which might explain why they appear to have become a tad more slopey recently. Maybe it’s the move to Paris? All that Parisian shrugging takes its toll on the clavicles.

Can it really be good for our Johnny to be this close to ROG? It might be all palsy- walsy in gay Paris but if ROG’s RTÉ documentary is anything to go by he still reckons he’s número un en Irlande.

You’d have to wonder what has ROG been saying to him? What has he been filling poor Johnny’s head with when he’s lining up his place-kicks? ROG’s voice: “Just remember I’m the best outhalf ever to play for Ireland. I’d never miss this kick. This could be vital. Remember the one you missed against the All Blacks? Jaysus! Good luck anyway!”

ROG was providing pitch side analysis on RTÉ last Sunday. Of course we can only see him from the waist up, but I reckon he’s probably still wearing his boots. You’d suspect if Johnny turns the other way before lining up a kick, ROG will run on and take it. He just can’t let it go.

The habit of players abbreviating each other’s names has got to stop: Heaslip’s assertion that “Even though we missed Paulie it was just great to have Drico, Kearns and Sexto leading the way.”

It especially doesn’t make sense when the abbreviated version is actually longer, as with Paulie O’ Connell. Another nonsense occurs if someone has a y or ie at the end of their name and their team-mates inexplicably transfer it to their other name. Like Rors Besty and Danny Tuohs.

Leinster goys
Presumably Chrisie Hens will join the fray soon. What to do with Devin Toner? (His name, I mean). It’s hard to imagine anyone messing with it, but someone, one of the Leinster goys presumably, thought long and hard and came up with...wait for it, yes, Dev Toner. Sure you wouldn’t be up to them.

Whatever name Schmidt picks at number 12 against the Welsh appears to be the only major call he has to make. Although personally I’d love to see either Madigan or Zebo in the 23 to offer some spark off the bench. So will O’Driscoll’s partner be Luke Marshall, the fresh-faced youth of a slapped bottom? Or Gordon D’Arcy who is now starting to resemble Tom Hanks in Castaway? Don’t know about you but I’m starting to worry for the lad.

However, his experience and defensive nous will surely be vital against Wales, presuming he can see Jamie Roberts through the beard.

Whatever the make-up of the playing squad, Schmidt will have his reasons and whether you agree with him you can be sure his logic will win you over. Indeed his normality is almost alien to the job of international head coach. He makes sense, shares his thoughts cordially and actually answers the question he’s being asked. Perhaps the most bizarre aspect is how novel it feels.

Serious gas
There’s plenty to a scare us about the Welsh back line, who will not be debilitated by the presence of Scott Williams instead of Jonathan Davies. Williams has serious gas, as he demonstrated scoring a match-winning wonder try in Twickenham a couple of years ago.

Warren Gatland has been using his famed sense of, what’s the word? eh, humour to deflect attention away from himself and you know who before Saturday. Sure, we’ve all moved on from the Lions last summer and we need to be mature about this, but we still want Ireland to whoop their Welsh asses with O’Driscoll scoring the match-winning try.

Maybe at the end, cameras watching, he could shake Gatland’s hand and return that “sorry about that, just doing my job” expression the Kiwi wore after the series win in Oz. That’s not asking too much is it? It’s nothing personal. It’s nothing impersonal either though.