Iain Henderson is set to miss the rest of the season, returning for South Africa tests 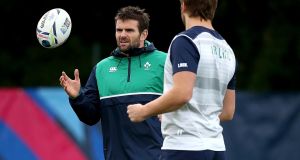 Ulster’s Jared Payne looks set to be fit for selection for the Six Nations while Iain Henderson is targeting the summer test series with South Africa. Photo: Dan Sheridan/Inpho

Ulster’s decision to register Jared Payne with EPC rugby suggests that the Ireland international could be in line to return to competitive rugby before the end of the month.

The 30-year-old is recovering from surgery to a foot injury sustained in a Rugby World Cup match against Romania that ended his tournament prematurely and the initial prognosis was a 10-week rehabilitation period.

Speaking at a press briefing Ulster assistant coach Neil Doak intimated that Payne and Craig Gilroy would be back sooner rather than later before conversely adding “that’s not looking as likely as it was a couple of weeks ago.”

However Wednesday’s decision to deregister the injured Peter Nelson and register Payne would appear to indicate that the New Zealand born player could play some part in the Irish province’s upcoming Champions Cup fixtures.

Ulster travel to France to take on Oyonnax in their rescheduled game on Sunday and will be on the road the following weekend when they head for London and a clash with an unbeaten Saracens side before concluding the pool stages of the European campaign by hosting Oyonnax in Belfast.

If Payne does manage to return to competitive fare it would be a huge boost for not only Ulster but also Ireland coach Joe Schmidt ahead of the Six Nations Championship. He has been consistently excellent in his 10-cap career to date.

There was less heartening news with Doak confirming that Iain Henderson (torn hamstring) was likely to miss the remainder of the season - the 23-year-old is targeting Ireland’s three-test summer tour to South Africa - while Tommy Bowe (torn cruciate) admitted that he will play no part in the Six Nations.

Bowe said: “Unfortunately it’s a slow process and to rule yourself out of the Six Nations is disappointing. I have to concentrate on getting myself back to where I was and there’s no point in rushing it but I’m still pretty positive I can add something to Ulster’s season.”

Meanwhile Cian Healy underwent elective knee surgery after suffering minor damage to the joint and with a three to four week prognosis on his return that could rule him out of Ireland’s opening Six Nations game against Wales, as well as Leinster’s games against the Ospreys, Bath, Wasps and the Newport Gwent Dragons.

In a medical update Leinster confirmed that Luke McGrath (blister) and Jonathan Sexton (knee) are both available for Friday’s game against the Ospreys while Isaac Boss is rehabilitating his hamstring injury. Jack Conan has had a medical boot removed while Mick Kearney, who has yet to play this season, has begun non contact training.

Could lack of sex force players to break the NBA’s bubble? 10:52
Derby wins moves Atalanta to second in Serie A 08:53
Mikel Arteta warns Arsenal must invest significantly to compete 08:15
Frank Lampard: top four race will come down to ‘focus and attitude’ 08:04
Chelsea remain in third after Norwich win; GAA dressing rooms to remain closed 07:25
Crossword Get access to over 6,000 interactive crosswords