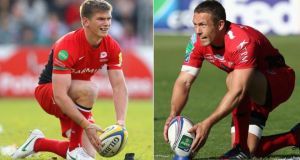 England outhalves past and present will meet in form of Saracens’ Owen Farrell, left, and Jonny Wilkinson of Toulon when the two clubs meet in this afternoon’s Heineken cup final in Cardiff. Photographs: David Rogers/Getty Images

So this is it then. The last Heineken Cup final does not so much look like a fitting summation of the last 19 years as a foretaste of the new order. Toulon and Saracens have both emerged as European superpowers, in large part by dint of private financial backing, both have cast their net widely and expensively to assemble internationally-studded squads, both are über-ambitious, both wear red and black, and both look here to stay.

Even their climbs have been parallel to a degree. Toulon have a long history and three French championships (1931, 1987, 1992), but were on their downers, impoverished and relegated to ProD2 for financial reasons, until they began their transformation in 2006 with the arrival of the high profile and very loud presidency of Mourad Boudjellal.

A multi-millionaire son of Toulon, of Moroccan heritage, who made his fortune in comic books, Boudjellal initiated a daring recruitment policy, purportedly out of his own pocket to restore the prestigious club to its former glories.

Those signed were more an announcement of intent as value for money, and so along came Tana Umaga, Victor Matfield, George Gregan and more, as Boudjellal and Toulon did more than any French club to initiate the flow of traffic from the Southern Hemisphere of marquee thirtysomethings in the twilight of their careers. Ambitions This policy helped achieve promotion back to the Top 14 in 2008, which merely fuelled Boudjellal’s ambitions after a season flirting with relegation. Amid rumours of a drinking culture, now players with the professionalism, personality and ambition to leave a lasting legacy, such as Jonny Wilkinson and Juan Martin Fernandez Lobbe, were acquired, and are still with the club five years on.

Toulon finished second in the regular season before losing an epic semi-final against Clermont, who went on to win their sole Bouclier de Brennus.

Toulon would suffer more near misses, losing the French Championship finals of 2012 and 2013, and the European Challenge Cup deciders of 2010 and 2012, but the recruitment of Bernard Laporte as coach in 2011 was eventually rewarded last season when they won the first trophy of the Boudjellal era with their Heineken Cup final triumph over Clermont at the Aviva.

In many respects, Boudjellal could be said to have taken a leaf out of the Nigel Wray manual. A former player, Wray was the first of the new breed of English club owners when he became Saracens’ benefactor shortly after the game turned professional in November 1995.

He recruited global stars like Michael Lynagh, Philippe Sella and Francois Pienaar. The Saracens coach at the time was Mark Evans, who reputedly had to convince Lynagh – a World Cup winner – his home ground really would be the antiquated Southgate in Bromley Road.

Wray too broke the mould in many ways, and Saracens promptly left their north London base to become tenants of Watford football club at Vicarage Road. Their results ebbed and flowed over the years, with Wray’s investment not meeting with the success he would have wanted, but to his credit, he has stayed around where others have not.

In 2008, Wray sold 50 per cent of the club to a South African consortium, including Johann Rupert, the founder of the luxury group Richemont and one of the wealthiest men in South African. Pienaar evidently retains strong ties with the club, as does the Springboks’ 1995 World Cup winning team manager Morné du Plessis.

Backed by this new South African money, Saracens’ ambitions were revived and extended. Matching their global ambitions, they have played and toured all over the world, and have moved into a new home back in their old north London hinterland, the 8,000-capacity Allianz Park, with its plastic, 3G pitch.

The salary cap in the Premiership is a notional €5.56 million, with one additional marquee signing, although it’s hard to believe Saracens have stayed within these parameters.

Heaven knows how much Boudjellal has spent at RC Toulon but their playing budget is believed to be €9 million, of which admittedly a €2 million is donated by the mayor, such is the importance and prestige of the rugby club to the port city on the Cote d’Azur. But nobody in French rugby or beyond believes Toulon stay within those parameters, given 10 of their galacticos earn a minimum of €500,000 per annum, with Wilkinson reportedly on between €700,000 and €900,000.

The Saracens’ team has retained a strong South African spine, with the likes of Schalk Brits, Alistair Hargreaves, Neil de Kock and Ernst Joubert. Even their English contingent has been swelled by naturalised South African-born players such as prop Matt Stevens, who is leaving at the end of the season to join the Sharks, Mouritz Botha and the centre Brad Barritt.

Extending the strong South African influence at the club, Brendan Venter became the club’s head coach and Ed Griffths, the Springboks media manager at the 1995 World Cup, is the club’s chief executive. No less than Boudjellal, neither Griffiths nor Venter, who still maintains contact via his laptop and monthly visits to the training ground alongside Mark McCall (which apparently have intensified in latter weeks), would be labelled amongst life’s great diplomats.

When Leinster beat Saracens at Wembley, Irish journalists witnessed an extraordinarily ungracious rant about the referee by Venter. When Munster visited Vicarage Road last season, the chanting and singing of the Red Army was tactlessly drowned out by Griffiths having the p.a. system playing the home club’s annoying little ditty.

The two clubs’ brash, nouveau riche images have not made them the most loved teams in their own lands, but each has thrived on us-against-the-world mentalities.

Post-match media briefings in the Stade Félix Mayol begin with Boudjellal’s personal view of the day’s events. He and Laporte usual have a gripe with the world, or perceived injustices with the refereeing fraternity, the French Federation, the Ligue National de Rugby and others. Saraboks They hog the headlines. Where Toulon assembled galacticos and made scarcely a contribution to the French team, similarly Saracens became known as “Saffracens” or “Saraboks”.

Nonetheless, while the similarities are striking they were arguably more relevant in the past. Yes, Saracens went out and recruited Billy Vunipola and James Johnston – two high voltage players who bring the kind of ballast required of the modern game – at the end of last season but unlike Toulon, who supplied only Mathieu Bastareaud and Maxime Mermoz to the French effort in the Six Nations, Saracens supplied the aforementioned naturalised South Africans, the Vunipola brothers, Owen Farrell and Alex Goode.

The latter pair are the club’s poster boys and are effectively products of the club’s productive academy. For there are more where they came from, with England set to further reap the benefit, if players such as hooker Jamie George, lock George Kruis and flanker Jackson Wray (no relation to the club’s joint owner) fulfil their anticipated potential.

In addition to recruiting a winger such as Bryan Habana, and then rarely giving him the ball, Toulon also have an academy, which producers players such as Gael Fickou, who then go on to play for Toulouse.

Yet the two clubs have one last thing in common that is particularly valid over the next two weekends. Each has underlined their expensive, if hard-earned status as Euro superpowers by reaching the finals of both the last Heineken Cup as we know it, and the respective finals of their two domestic championships.

A notoriously difficult double to achieve, which Guy Noves branded impossible as recently as the season before last, no club has completed a European Cup/domestic championship double since Wasps in 2006. Only clubs with heavy investment and test quality back-up can only hope to emulate that feat. And both Toulon and Saracens are now firmly in that category.