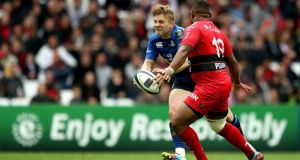 Ian Madigan’s fateful pass, which was intercepted for the Bryan Habana of Toulon’s extra-time try at the Stade Vélodrome. Photograph: James Crombie/Inpho.

1 Ian Madigan: There are some jaw-droppingly marvellous clips of Carlos Spencer on YouTube. He almost had a wonderful All Black career too. Such was his majesty in full flow the Auckland faithful labelled him King Carlos.

Now ask any Kiwi for their abiding memory of this wonderfully talented outhalf and most will say Sterling Mortlock’s try in the 2003 World Cup semi-final.

That’s the tournament when New Zealand coach John Mitchell put his trust in Spencer and it’s when he shined the brightest. That is until flinging a pass into midfield that the Wallaby centre cleverly read to gallop the length of the field. That try proved the pivotal score in a match New Zealand really should have won.

Spencer was in his prime but only played seven more times for the All Blacks as the age of flawlessness, also known as Dan Carter, began in 2004.

Madigan is a proven match winner. See the Champions Cup quarter-final against Bath when he landed all six penalty goals or away to Castres earlier this season.

But he retains a strong tendency to dilute solid place-kicking performances with moments of calamity.

His two head coaches tend to be in agreement on this.

Matt O’Connor has flatly refused to trust him at outhalf for big European matches, but the Australian needs his place-kicking excellence, all to the detriment of Gordon D’Arcy’s career it seems.

There were plenty of positive Madigan contributions at the Stade Vélodrome. He landed three penalties for a 9-6 half-time lead before hitting the post when snatching at his 64th minute kick. “That’s pressure,” said former Lions outhalf Stuart Barnes on Sky Sports.

But he recovered to land two more clutch kicks that kept matters evenly poised at 15-all in the sixth minute of extra-time.

Problem was O’Connor had seen enough after Madigan’s unnecessary long pass was read by Bryan Habana for Toulon’s intercept try. It was a four on two situation. Leinster had Toulon on the ropes. Madigan went for the knockout blow but got caught cold instead. Mistakes like that decide semi-finals.

Spencer knows this, now Madigan does too.

Difference is, at 26, there is plenty of time for him to grow into a more rounded player. Almost certainly it’s a mental more than talent issue. Not that he is weak of mind either. That 70th-minute penalty was from way out. The 86th minute touchliner required a steely nerve.

Leinster needed him on the field to convert Seán O’Brien’s try but O’Connor had replaced him with D’Arcy so Gopperth took and missed the shot to make it a three-point game.

Schmidt appears to be of a similar mind.

Johnny Sexton makes this debate largely irrelevant next season but when he was still injured in February Schmidt went with Ian Keatley for the Rome game. Keatley lacks Madigan’s natural ability but is less likely to put the kick-off out on the full.

Madigan could well come out next Friday and tear Ulster apart in Belfast but in the biggest games, when it comes to choosing between the solid outhalf or maverick playmaker, the head coach has no choice to make at all.

2 Mindset: On at least three occasions Leinster’s kicked long when a string of players where available to counter-attack from deep. The weather and lack of territorial advantage dictated this but it also seemed instinctive. Leinster are not the free-wheeling, heads-up attacking side of previous seasons. It’s not in the psyche at present. Same can be said for Ireland until they had no option but to hit a high score at Murrayfield. Same goes for Leinster in Marseille.

3 Matt O’Connor: Plenty of, largely ignorant, comments have heaped the majority of Leinster problems on Matt O’Connor’s shoulders this season. But in so many respects the man inherited a poisoned chalice. The club’s best players – Johnny Sexton and Isa Nacewa – left as he came in the door yet a Pro12 title was won and European quarter-final reached. This season has been disastrous on the injury front. Worse than ever before. The leadership void beneath Jamie Heaslip and Rob Kearney (Cian Healy and O’Brien were crocked until recently) was stark as D’Arcy and Shane Jennings were not being picked.

Next season’s Pro12 campaign will be equally challenging as so many players will be at the World Cup but look at the difference in options O’Connor will have come November. Kane Douglas should be fit. Ben Te’o will be better. Isa Nacewa will be back. Sexton too.

This performance should be enough to quieten that rabble until then.

4 Leinster remain a European force: A new squad in so many respects and still a score away from another European final. There was something comparable to Munster’s stubborn resistance of the previous two seasons, despite a new generation of players, in this Leinster defeat.

But the root and branch issues – strength in depth, cash flow – are by no means as problematic in Dublin as they are in Cork and Limerick. Leinster remain an opponent to be feared by the English and French clubs.

5 Defence: They fixed it. After a season of porous defending Leinster finally shored up the leakages against the second best team in Europe (Clermont will beat Toulon at Twickenham). They made 100 tackles, missing just eight, for a 93 per cent success rate.

It helped that they dramatically turned around the possession statistics at half-time, from about 35 per cent up to a 50 per cent share, to force Toulon into making 94 tackles. The French champions missed only nine for a 91 per cent success rate. The turnover count? Toulon robbed 19 to Leinster’s 18 steals. Line breaks? Just one over 100 minutes of rugby.

That’s a valiant collective performance from both teams. It’s also terrible spectator sport for the neutral. Just like Saturday’s semi-final between Clermont and Saracens.