Stuart McCloskey and Ruan Pienaar sit out for Ulster 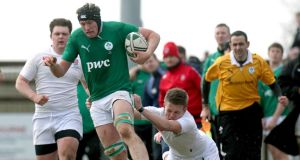 Secondrow Kieran Treadwell, seen here playing for Ireland U18, will join Ulster from Harlequins in the summer. Photograph: Ryan Byrne/Inpho

Darren Cave has recovered from a shoulder injury and will return to the Ulster XV for Saturday’s crucial Champions Cup game against Oyonnax at Kingspan Stadium.

The centre will feature for the first time since the start of December, with Stuart McCloskey getting a well-earned rest after playing all 16 of Ulster’s matches this season. Number eight Nick Williams is also back in the fray.

New Ireland captain Rory Best has minor back tightness and has not been able to train fully this week, so he will start the game on the bench. That means that Rob Herring, who has been named in Ireland’s squad for rounds one and two of the Six Nations, will deputise as both hooker and captain.

Ruan Pienaar has been ruled out by illness, while Wiehahn Herbst has a foot injury, so Paul Marshall and Ricky Lutton come into the side at scrumhalf and tighthead prop respectively.

Herring and Lutton are joined in the front row by Kyle McCall, with Alan O’Connor and Franco van der Merwe continuing in the engine room. Robbie Diack and Sean Reidy will again pack down either side of Williams in the back row.

Marshall is joined at half back by Paddy Jackson, with Cave and Luke Marshall combining in midfield. The back three consists of Andrew Trimble, Craig Gilroy and Jared Payne, who will make his first home appearance of the season for Ulster.

Commenting on his selection, the Director of Rugby, Les Kiss, said: “It’s great to have Darren (Cave) and Nick (Williams) back in the team. We welcomed Jared (Payne) back last week and that was pleasing for us too. With Rory (Best) on the bench it’s another opportunity for Rob (Herring) to show what a great player and what a great leader he is. Ruan (Pienaar) has been struggling with illness all week so he is unavailable, but we know that Paul (Marshall) will come in and do a fantastic job for us.”

Following their 32-14 bonus win over Toulouse last week, Kiss is expecting a tough encounter against Oyonnax: “They are a good team and they will provide a big challenge for us. We need to stay focused on our game, make our tackles, start the match with the right attitude and play with discipline, because they can hurt you if you give the ball away easily. They showed that last week against Toulouse and against us a fortnight ago.

“We know our best chance of going through will be by earning a bonus point victory so to give ourselves the best chance we need to play with accuracy and work hard for each other for 80 minutes. We’re optimistic that we can get the job done and with the unpredictability of this competition, there’s a real chance for us to go through. Hopefully there will be a good crowd at Kingspan and we can give them something to cheer about.”

Ulster added to their secondrow resources on Friday with the signing of the Irish-qualified England under-20 player Kieran Treadwell from Harlequins.

The 6ft 6in, 19 stone lock has signed a two-year deal with the province and will join this summer. Treadwell is eligible to play for Ireland through his mother and has represented the country at underage level, having earned four caps for the U18s in 2013.

Treadwell joined the Harlequins Academy ahead of the 2014/15 season and made his senior debut for the club in the LV= Cup match against Cardiff Blues in 2014. He has since made five senior appearances for the club.

He was a member of the England squad that won the under-20 Six Nations Championship last March.

Kiss welcomed the signing, saying: “Securing someone of Kieran’s ability and potential is hugely exciting for Ulster Rugby. It is key for us that we are not only successful at provincial level, but that we can produce viable candidates for the national team. We believe that Kieran has the goods to deliver this. He is a big, uncompromising ball-carrier and he has a natural athletic ability that belies his size.

“Having already gained experience of calling lineouts, he is a natural leader who will develop further and become an integral part of our squad.”

Treadwell said: “I’m really excited about the opportunity that lies ahead with Ulster. They are an ambitious club with lots of young talent coming through into the first team, a number of whom I played both alongside and against for Ireland U18s and England U20s. There is also a very clear pathway for me at Ulster if I work hard and impress the coaching staff.”