Sexton concentrating on positives as Six Nations looms into view

Leinster outhalf finally putting the disappointment of World Cup behind him 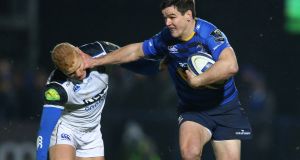 Jonathan Secton hands off Bath’s Tom Homer at the RDS. “I’ve said it all along, from day one, I rely on everyone around me.” Photograph: Billy Stickland/Inpho

It’s been an eventful last five months in the rugby life of Jonathan Sexton. The perception of others has been to the fore when it comes to topics such as his form, his being likened to Zlatan Ibrahimovic and several points in between.

The Leinster and Ireland outhalf removed some of the shading between perception and reality, as he sees it, starting with the Rugby World Cup, when asked to offer his thoughts on the season to date.

“Firstly, it was all about getting over the disappointment of the World Cup, especially personally. Missing out on most of the France game and the Argentina game were the biggest disappointments of my career, particularly as I had done absolutely everything right in the build-up to it.

“I felt I was in a really good place physically and mentally, but then for it all to unravel was pretty hard to take. There were a couple of poor performances but then I thought I did well in a couple of other games and found some form. That is how I would view it.

“Maybe it is because the poor performances came in a couple of high-profile games, it becomes a story when everyone is watching. Maybe not so many watch the Pro12 games when I did really well. But once the fella beside me here (Leinster coach Leo Cullen) is happy and Joe Schmidt is happy then that is all I really care about.”

“I’ve said it all along, from day one, I rely on everyone around me. When I’m going well it is largely because of them, because of the coaching staff, because of the players all doing their job, making mine a lot easier. That’s the bottom line. It doesn’t help when you make individual errors in games.”

Sexton feels Leinster have “turned a corner” in playing terms recently after a slow start to the season. Even in the back-to-back defeats to Toulon there were some performance nuggets to mine, while he is adamant the club have the wherewithal to win trophies going forward.

“I do think that with the guys that are coming through and the guys that are staying on, and hopefully a few more guys coming in, I think we’ll be in a really good place for the rest of this season, and then we can look at Europe again next year.”

While his focus is very much on the Wasps match on Saturday and maintaining a winning momentum, he is looking forward to embracing the upcoming Six Nations Championship with reasonable game time in his legs rather than the 12-week playing hiatus he had to endure in the build-up to last year’s tournament.

“It was a unique position not playing for 12 weeks and having to play for your country straight away.

“It was something I wouldn’t like to do again. It was a tough week, preparation-wise, because you had nothing to base it on.

He’ll be delighted to play under Ireland’s new captain Rory Best. “You can see from the way he conducts himself on and off the pitch that he is the ideal candidate to take over.”

There was even time for a lighter moment regurgitating the French media’s crusade during the World Cup to unsettle him by suggesting in personality terms he was as volatile as Zlatan Ibrahimovic.

Sexton offered: “I’m not Zlatan anyway, I’ll tell you that. I don’t know who I am. People portray me as some grump. I am a man of many faces maybe. Again, perception and reality.”