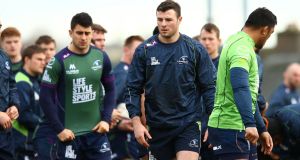 Robbie Henshaw is back in the Connacht team. Photograph: James Crombie/Inpho

Connacht head coach Pat Lam has welcomed Robbie Henshaw back into his side to face Enisei-STM in the final pool game of the European Challenge Cup at the Sportsground on Saturday.

The Irish centre is one of six changes to the starting team that lined out against Brive in France last weekend.

All four Connacht players named in the Ireland Six Nations squad this week are included. Nathan White returns to join Ultan Dillane in the pack while Robbie Henshaw and Kieran Marmion return from injury to take their place in an otherwise unchanged backline.

There is a new front row with the introduction of local players Denis Buckley and Dave Heffernan alongsideWhite while Eoghan Masterson, named at Number eight, allows captain John Muldoon return to blindside flanker.

“We know we will need a clinical and focussed performance tomorrow that ensures we take our chances and scores. Enisei will be coming here with confidence following their defeats of both Brive and Newcastle in our pool. They are a big, physical side and can do some damage if they are given a chance. But it’s up to us to take control of this game from the start.

“It’s great to have some guys back from injury for what is a crucial game for us in terms of our European ambitions. We are really excited to be back at the Sportsground tomorrow and we are determined to give our loyal supporters something to cheer about.”

1 Gordon D’Arcy: Change has to happen before Ireland's trip to Paris
2 Out of Bounds: Patrick Reed helping make the ‘C’ word less taboo
3 Gerry Thornley: Wild reactions to this Ireland team as fickle as the wind
4 Seán Moran: Dublin and Galway make good starts in differing circumstances
5 Kevin Seaward: ‘The first time I wore the Vaporflys, I hated them’
Real news has value SUBSCRIBE